As many of you know, we have an exciting trip coming up in a few days. In an effort to get you in the habit of checking our blog, we dug up an old, dusty notebook from 2013 and typed out journal entries from our four-day bike trip around the gorgeous San Juan Skyway in Colorado.

We started off this morning at 8:15a (after Teddy woke up and started working while I slept on his functional sleeping pad because mine decided to stop working last night). We said goodbye to Jonny and Kathy and began our journey. Today includes a 40-mile descent!

Our bums hurt from the very beginning of the day and never stopped hurting. I thought today was harder than yesterday. Just because it’s mostly downhill, doesn’t mean it’s easy! About 10 miles in we reached Rico, a tiny, adorable town where everything was closed except for a tiny, adorable organic espresso shop, where we stopped for a drink. Sitting in a vintage matte grey pickup truck was Felix, a former paraplegic skicross racer who used to compete in the X-games, but they cut the event due to too many injuries and apparently a death. He is now a “migrant festival worker.” He informed us that there’s a festival in Telluride every weekend in the summer except one, which is crazy in general, but particularly because it’s so far from any major city. His two favorite festivals are the Mountain Film Fest and the Jazz Fest. Maybe we’ll travel back for those someday.

I ordered a chai with a shot of espresso and we sat on the porch chatting with Felix and some locals. They told us crazy stories about people who accomplished impressive feats, such as a group of construction workers who would hike over a huge mountain (20 miles!) to Putnam every day, or cross country ski there in the winter. Another guy told us about a group of cyclists who recently rode the whole San Juan Scenic Byway in one day (17 hours)! I’m not sure if these folks were trying to make us feel like wimps, but I sure did. Felix also told us about some hot springs a mile north of Rico that are across from a metal shack. We didn’t want to go back uphill, but will likely check them out the next time we’re down here.

Continuing down the mountain we ran into Jean-Pierre, who is riding from San Francisco to Montreal. He had a very long day ahead of him. He also had very cool maps from the Adventure Cycling Association that we should get next time. They even show you an elevation profile to prepare for the climbs! We had a gorgeous descent until we reached Dolores. All of a sudden, the climate, vegetation, scenery, and people changed for the worse. Of note, the fire danger signs until we reached Dolores were all “low.” When we reached Dolores and ever since, the fire danger has been “high” and we even saw an active forest fire on our way up to Morehead campground.

We got to the letdown of a town called Cortez, where everyone was mean to us. First, as we rode in, a guy in the passenger seat of a passing car pretended to smack my bum. Gross. People after Dolores stopped giving us a wide berth, in general. We got to the Kokopelle bike shop and they were okay. The lady working there sort of hovered over us the whole time, which was annoying, and everyone seemed more into BMX biking than anything like what we’re doing, so they weren’t the friendliest or the least bit interested in our trip.

Megan, the hovering bike shop employee, recommended a local organic restaurant called The Farm. We ordered tons of food because we were starving, but unfortunately, it wasn’t all that great. Ted’s French Onion soup was cold and instead of melting Provolone on top, they had some mysterious shredded cheese tossed in that didn’t even melt because the soup was cold. My burger was overcooked and the “feta” in our Mediterranean salad tasted like goat cheese (and not goat feta), which would have been fine if I wasn’t expecting feta, but was disappointing because I was. The waitress spilled the fancy tomato jam that came with the burger, then brought me regular ketchup as a replacement. Just a bunch of little things that made our experience less enjoyable than it might have been.

We stopped for some groceries, then started our climb to Mesa Verde. It was hot, but we made it. We got to the entrance where we learned that a car pays $15 to enter the park, while bikes and motorcycles pay $8 each. This is infuriating to me. A gas-guzzling conversion van carrying eight people pays less than two people on bikes. And bicycles pay the same admission as motorcycles?? Oh well. 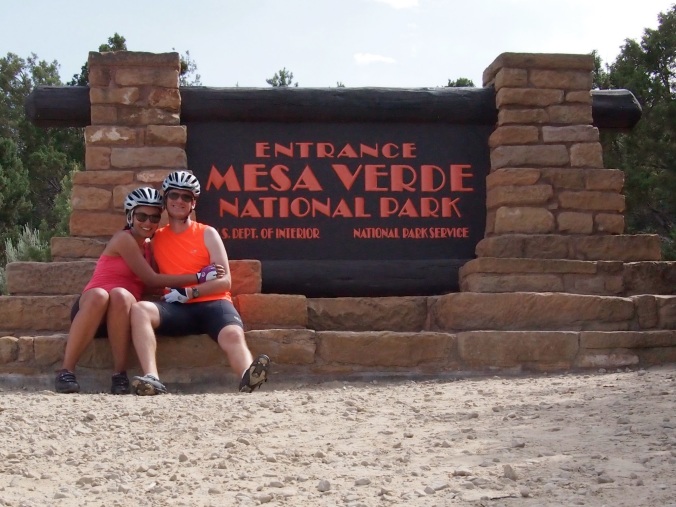 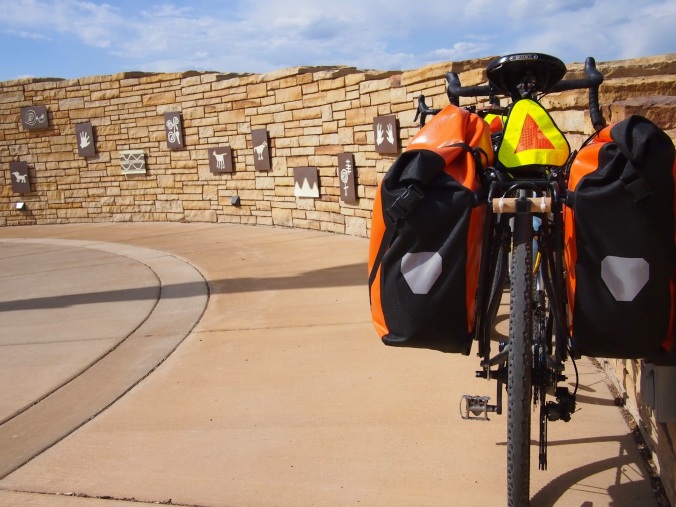 Four. Mile. Climb. 1,100 ft of elevation gain at the end of a 70+ mile day. We got to the campground and found that our campsite was another $30 (!) and the employee at the campground neglected to tell us about the shortcut to the site that would have saved us another mile of climbing. We met a couple from Illinois who were very friendly until Ted asked if we could hitch a ride to the dwellings tomorrow (biking there would add another 40 gruesome miles onto our day tomorrow, so we were hoping to find a friendly stranger that wouldn’t mind bringing us with them). They got very awkward and told us that their minivan was too full with coolers and luggage to fit any people inside. It was just the two of them! People travel with way too much stuff.

Like I said, people are not being very kind on this leg of the trip. We probably won’t go to the dwellings unless we can hitch a ride (which makes the $46 we spent to stay in this campground completely useless), but we’re on a tight schedule and can’t afford to add 40 miles onto our day tomorrow if we want to make it back in time. We’ll see what happens, but I’m not optimistic.

We cooked tortellini with salami and zucchini for dinner and ate cookies from the last time we met kind people. Hopefully tomorrow will be a better day.