As many of you know, we have an exciting trip coming up in a few days. In an effort to get you in the habit of checking our blog, we dug up an old, dusty notebook from 2013 and typed out journal entries from our four-day bike trip around the gorgeous San Juan Skyway in Colorado.

Teddy says this was the hardest cycling day of his life. I agree. It was hard. We started at 7:30a with an immediate climb. The first 10 miles took us over our very first Colorado mountain pass, Dallas Divide Summit (elevation: 8,970ft). I suppose it was sort of a wimpy pass, but it was definitely a challenging start to our day. It was almost exactly a 2,000ft. climb. Then came a massive descent into Placerville, an adorable tiny community. We stopped at a park. Actually two parks. One had water and a broken toilet, the next had working everything and gorgeous views. I think it was called Down Valley Park, but I’m not sure. 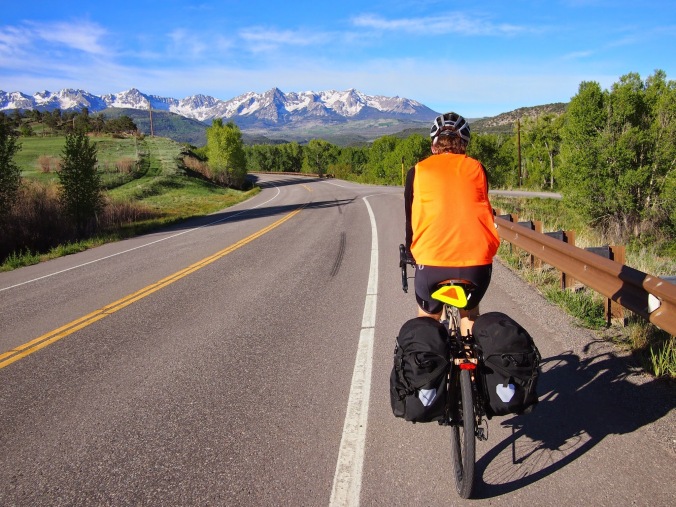 We saw several road cyclists who seem lucky enough to actually live out here. Everyone’s been super friendly to us thus far. More about that later.

From Placerville we had an unexpectedly difficult climb into Telluride. It was only 800-1000ft of elevation gain, but it was scorching hot, we were famished. I get shaky and dangerous when my blood sugar gets too low, so I had to stop on a dangerous shoulderless curve to get quick sugar. We climbed a bit more, then stopped at Keystone Lookout to eat a full lunch and we were both pooped. We toyed with the notion of just going to Telluride and spending the night, but pushed on!

After rounding the curve to continue on 14S, we had another super steep climb. Toward the beginning, we both smelled spent grain and it was hard not to turn around and find that brewery! At the top of this 1,100ft 3-4 mile climb. (Never-ending climbing!) We hit the most spectacular view I’ve ever seen in my entire life. Loads of rugged mountains in the distance, large green pastures in the foreground, and lush evergreens scattered throughout. The sky was spectacular, so big and blue with the brightest white clouds. We stopped in a driveway to take pictures and a real-life cowboy drove up and offered to take pictures of us. His name was Randy and he runs horse rides for tourists on his ranch.

From there, the next 6 miles were pretty tame – a much more reasonable elevation gain. We filled up water at Sunshine campground (beautiful), ate tons more food, and climbed on. We reached another gorgeous lookout (Ophir), took some pictures (any excuse to stop), then hit an unexpected 1000ft drop! We flew down (top speed: 36.4mph) and immediately started our climb to Lizard’s Head Pass (aka, the most miserable 1.5 hours of climbing of our lives). When we were near the top, a lady with a road bike on her Subaru stopped and gave Teddy two full-sized Snickers bars! I immediately decided that I would do the same for any bike tourist I happened to pass in the future because it truly made our day.

When we finally got to the top (10,222ft), Teddy whined and complained like a baby. He also lay on the ground motionless for 10 minutes. We took some photos, then started a 6-mile descent to our campground against a strong headwind. All of that work and the stupid wind forced us to pedal downhill. 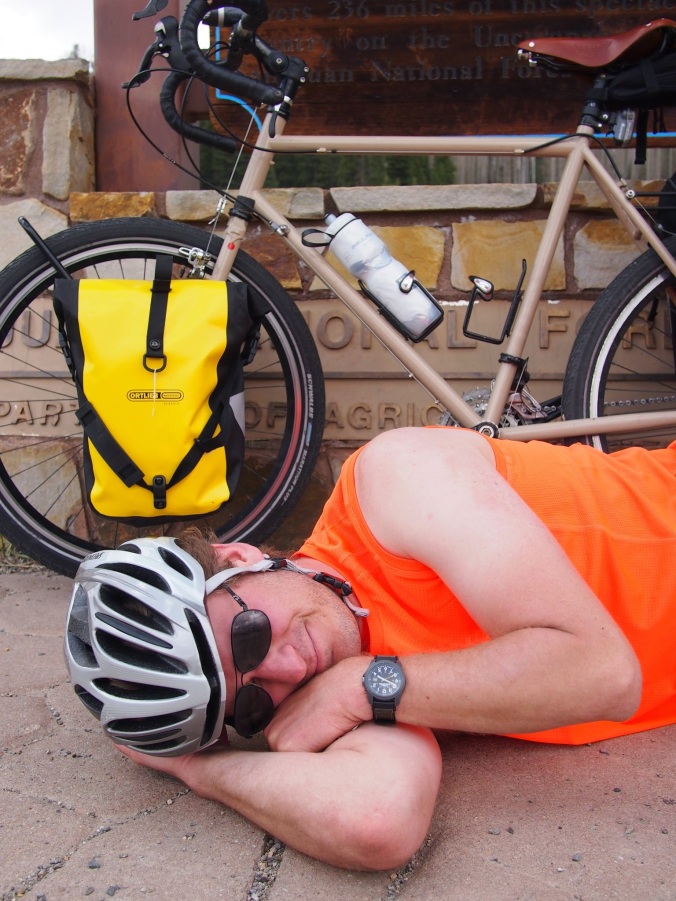 Our campsite hosts, Jonny and Kathy, were super friendly and impressed by our journey today. We got to our campsite and shortly after, Jonny came up with a bag of fresh-baked peanut butter cookies and free firewood! I swear I’ve encountered more friendliness and generosity on this trip than in my previous two years in Colorado. People have also been getting far over for us when passing, for the most part. Overall, people don’t seem nearly as annoyed by bike tourists as they were in Oregon. Also, so far, there’s been far less traffic and far fewer RVs and logging trucks. Wonderful!

Dinner tonight was great. We had Thai lemongrass rice noodles with chicken and zucchini.