***a note on stats: It has come to our attention that the elevation numbers from the Ride with GPS app can be wildly inaccurate. When I upload the rides to Strava (a different ride-tracking app), I often get much lower numbers. I’ll keep including them for the sake of comparison, but take them with several grains of salt.***

I woke up at 5:45a to start getting our stuff together. I headed downstairs to start loading up the bikes around 6:00a and there was Gerry, already up and making breakfast for all of us. A hearty breakfast of eggs, sausage, today, and orange juice was ready fifteen minutes later, and we eagerly chowed down.

Gerry and Mary decided to ride with us for the first 11 miles of our day, and after breakfast we all busied ourselves getting ready to go. After a few false starts, the five of us caravanned off. This was the biggest group we’ve ridden in since Logan Pass, and I really enjoy riding as part of a pack. I marvel at the people who are doing this trip alone. I think I would break down doing all of this riding without company. 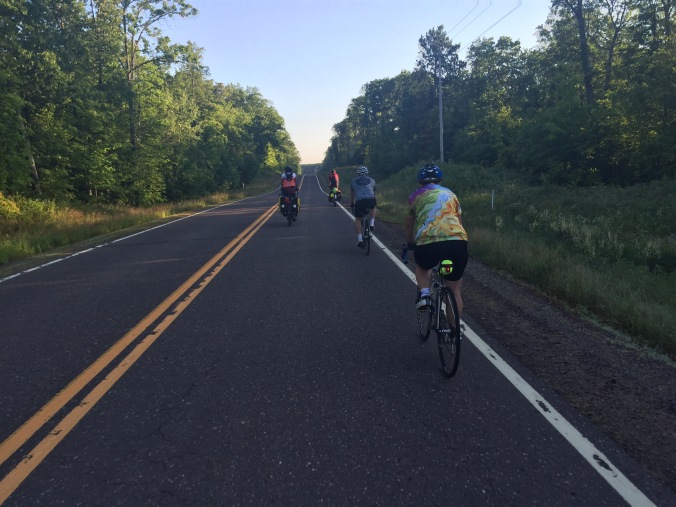 The 11 miles we rode with Gerry and Mary brought us to state route 77, which as a two-lane, low-traffic highway was much busier than the quiet county roads we’ve ridden on the last few days. However, it was newly resurfaced, which made riding on it feel like riding on air compared to some of those same county roads.

We said goodbye to Gerry and Mary, and Dani, Meng, and I jumped on 77 and headed east. We stopped at a gas station in Clam Lake to stretch, snack, and try to diagnose a creaking noise that Dani’s bike started making with every other pedal stroke when she hit a big pothole earlier on. We adjusted the rear hub cones and repositioned the fender and the noise went away. 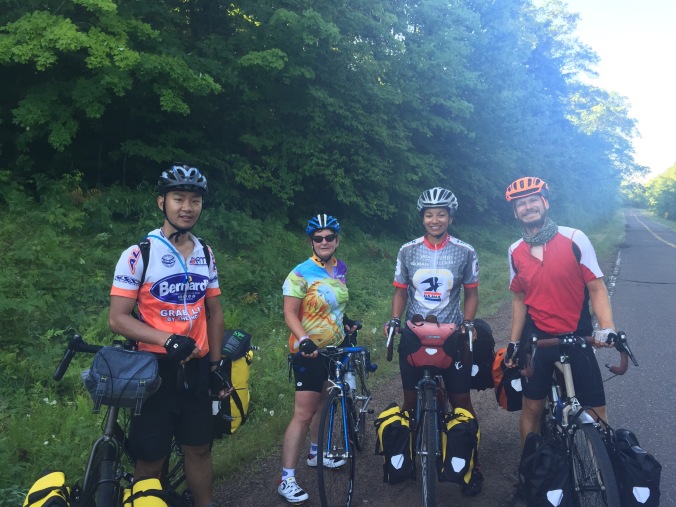 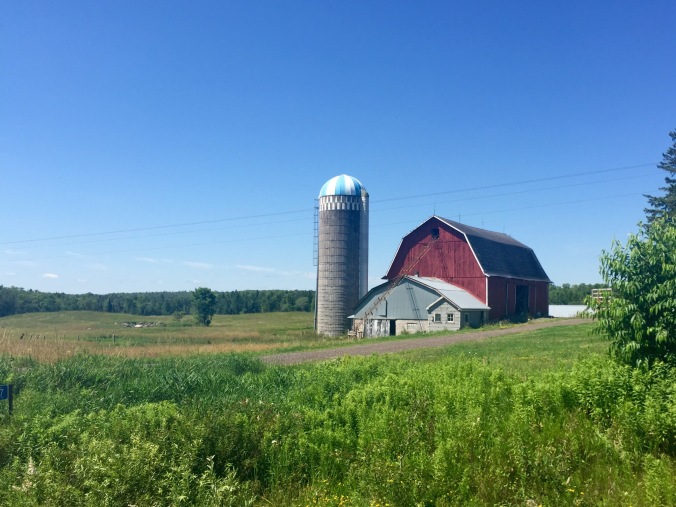 We continued on the beautifully smooth 77 for another 17 miles to Glidden, which was Meng’s final destination for the day. After saying goodbye, we carried on for nine more miles (on a good, but less smooth road) to Butternut. We were excited to get to Butternut a) because it’s a fun name for a town and b) because the couple we meet yesterday in Edgewater recommended Jumbo’s Diner in Butternut to us, using words no bike tourist can resist, “They serve huge portions of good food for really cheap prices.”

They were right. Jumbo’s is a great little diner set back from the road a little bit. The locals eating there didn’t seem to know what to make of us, and so they all just stared at us for 10 or so minutes after we sat down. We unknowingly made it in just a half hour before they closed, thank goodness. I had a chicken quesadilla and Dani had a chili cheese omelet. I also grabbed a big $0.60 cookie for later. 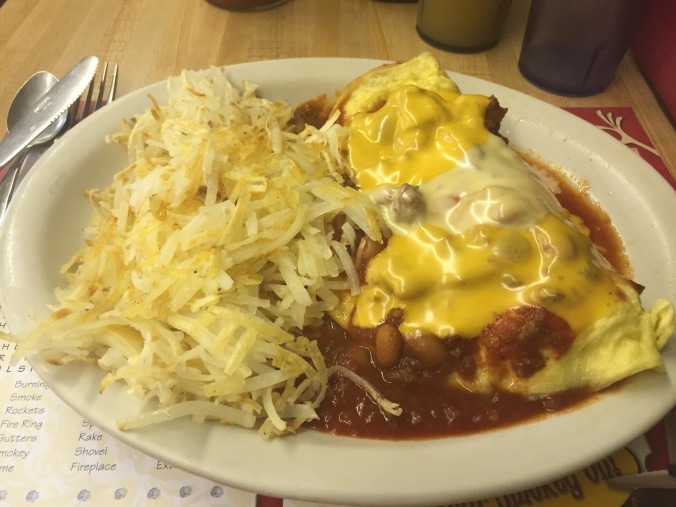 After Jumbo’s, we were back on county roads for the next 30 miles. Our route took us through some gorgeous lake country and past the Turtle Flambeau Flowage. 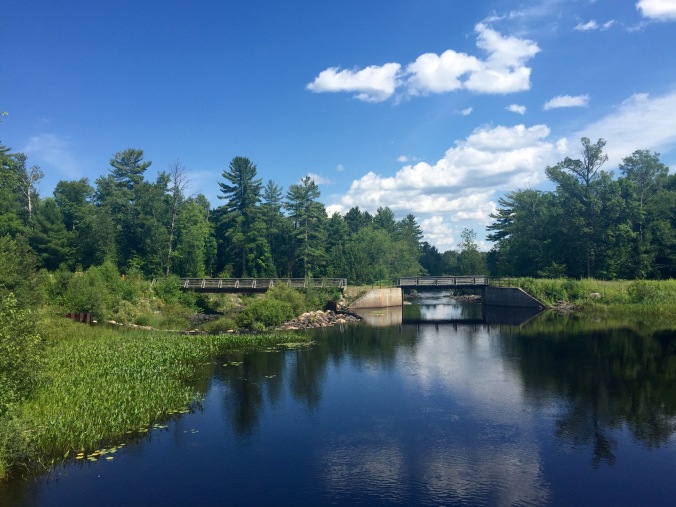 It was beautiful, but hot, and we were excited to make it into Mercer to grab a cold drink and buy some groceries for dinner before the final push into Manitowish Waters. As we were standing around the gas station drinking Gatorade, Carol from Connecticut rolled up. She is on a tour from Vancouver back to her home, by way of Jasper and Banff national parks. She stayed at the same place as us, and is a remarkable woman. She is survived a multiple-year battle with cancer, and promised herself that if she made it through she was going to really live. Her enthusiasm and optimism was infectious, and she was a delight to be around.

Anyways, from the gas station we swung by the grocery store to shop for dinner and New Glarus beer. Beer from the New Glarus Brewery is as famous as it is rare (for those of us that don’t live in Wisconsin, at least). They only distribute here and I was determined to try some before we head into Michigan tomorrow. First I had to decide between mixing a six pack of their standard beers or going for a bomber of their specialty stuff. After a while, I decided to go the specialty route, but then I had to pick from the three that were available. 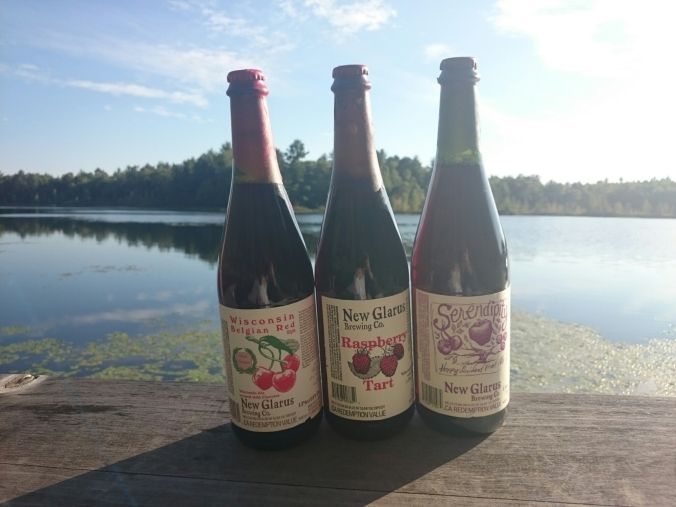 After the grocery store, it was a fast 10 miles to the North Lakeland Discovery Center, a lakeside lodge and education center on an undeveloped lake that allows touring cyclists to stay for free when rooms are available. It’s a fantastic place. We had our own room, and access to free showers, laundry, and use of their kitchen. We showered and called our parents before heading to the kitchen to make a stew-y sort of meal with rice, beans, potato, zucchini, green pepper, and tomato. And lots of spice (because Dani cooked and that’s just what happens).

After dinner we drank a New Glarus beer while watching the sun set over the lake. 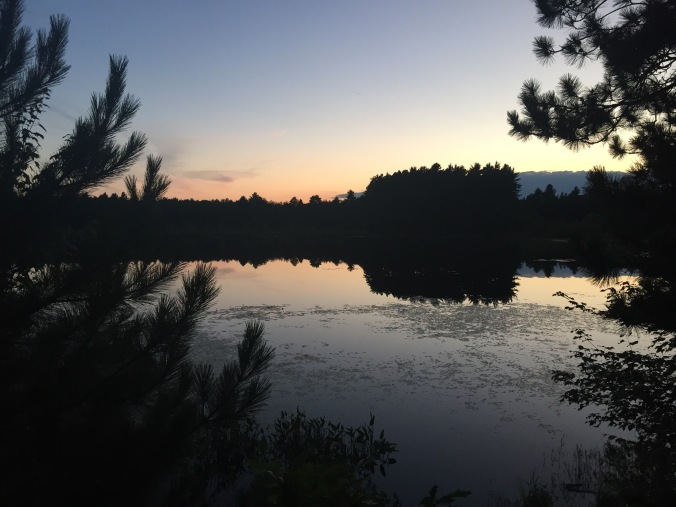 The mosquitoes came out in full force after the sunset, so we headed back to our room where we tried to catch up on the blog, but quickly succumbed to exhaustion. One day we’ll catch up.