The alarm went off at 7:00a, but it was raining, so we went back to sleep for a bit. I’m fine with getting rained on, but I struggle to get up, especially out of a comfortable bed, when it’s raining. We didn’t sleep for long, though, because we had a warm showers stay in the evening and our host was planning to meet us on the road to bike with us to his house.

Jeannie prepared us a wonderful breakfast, which included a hash brown egg bake, zucchini bread, scones, orange juice, and coffee. We said goodbye and rolled out around 9:40a. The morning began with more farmland and rolling hills on pleasant, low-traffic roads. 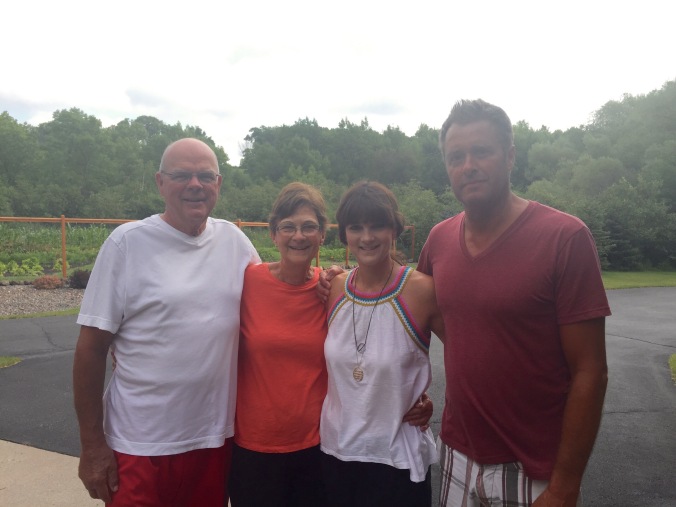 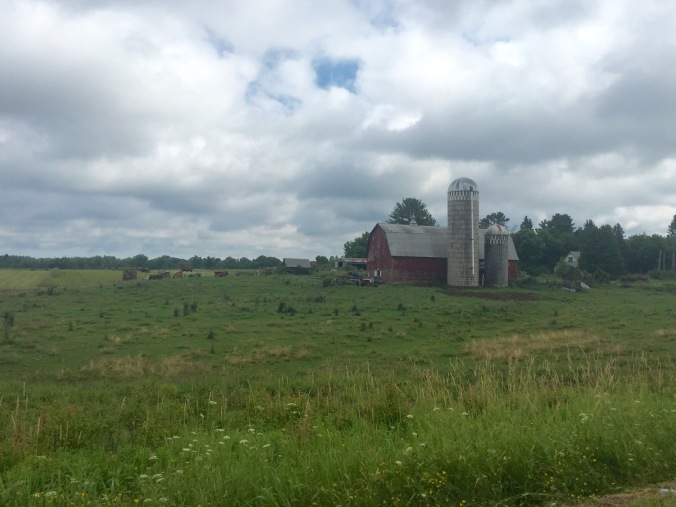 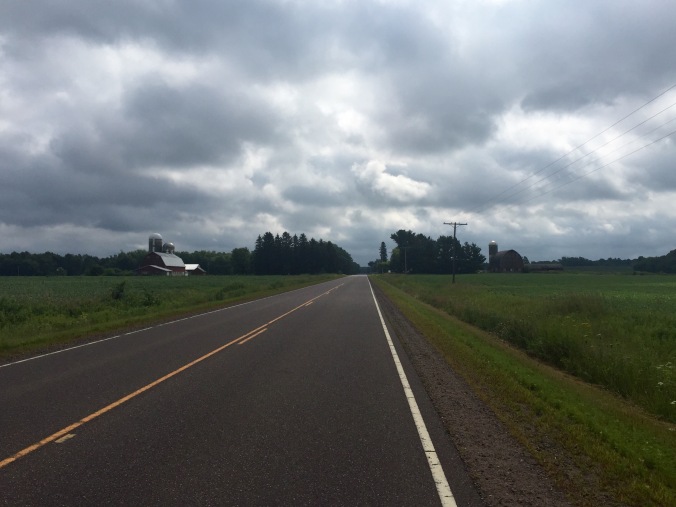 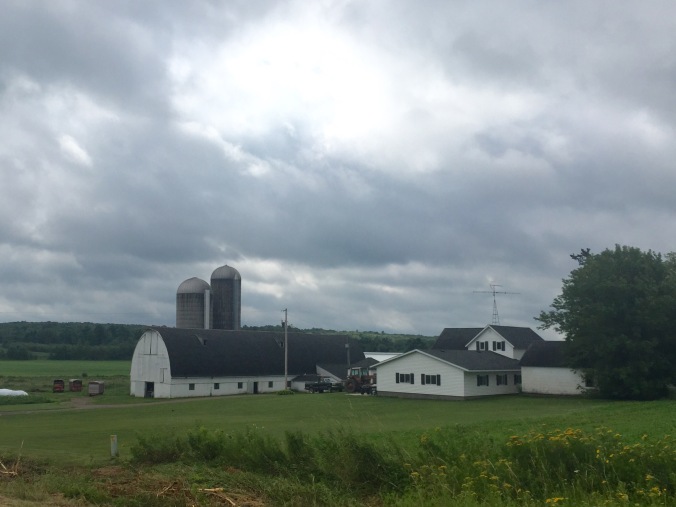 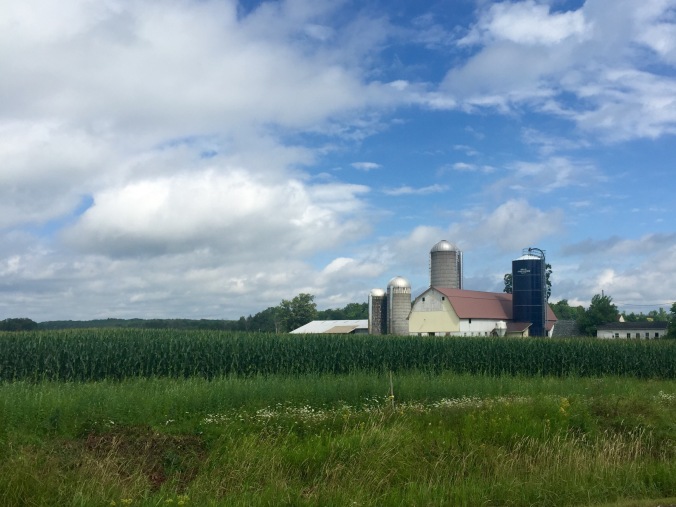 We quickly made it to Haugen, a tiny town that has an opera house, but does not have a full grocery store, and stopped in the convenience store. The owner of the store greeted us at the door because he is very interested in bike tourists and wanted to make sure we stopped in. We bought some mediocre chocolate milk and signed his guest book before heading out. It’s fun to meet people who think what we’re doing is cool, rather than a masochistic waste of time. The latter opinion is becoming more prevalent the deeper we get into the Midwest. 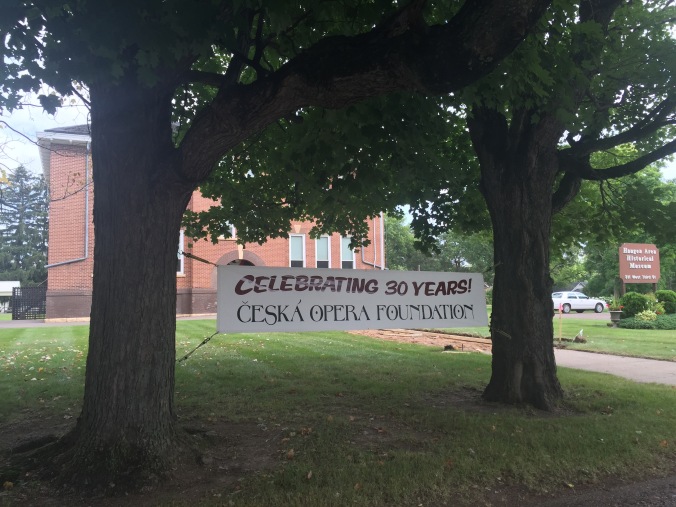 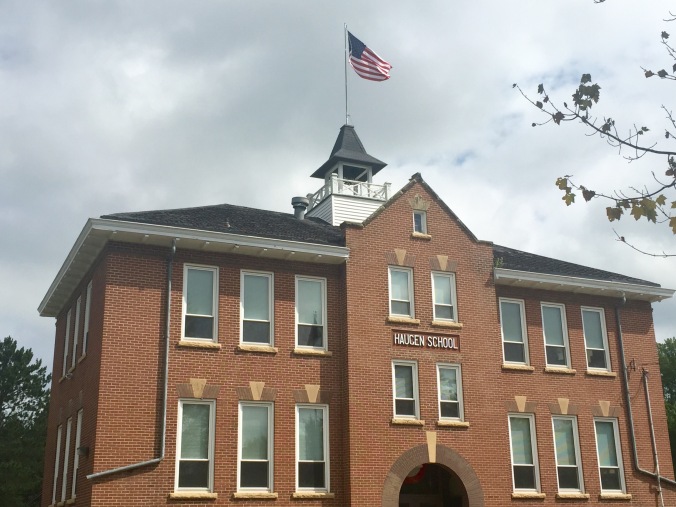 Soon after leaving Haugen, we hit my least favorite type of terrain to ride: short, steep rolling hills. I’m not kidding when I say I’d prefer a mountain pass to this terrain. You are just constantly shifting from your absolute lowest to absolute highest gear, which is frustrating and exhausting. You can never really get into a groove, and every time you crest a hill, you can see two or three more hills ahead of you, just taunting you. At least with a mountain pass I can drop down to my lowest gear, get into a groove, get all of the climbing done at once, know exactly how long I’ll be climbing, and get to go downhill for miles at the end. Ted disagrees with me on this one.

We entered a touristy area with a lot of resorts on lakes. It seems that fishing, boating, and hunting are the main recreational options at these resorts, all things we’re not interested in doing, so there was no temptation to call it a day and hang out at a resort. It also meant that a whole lot of the vehicles passing us were large pickup trucks towing fishing boats. Luckily, Wisconsin drivers have passed exceedingly carefully, slowing down and driving behind us until they were sure it was safe to pass, which sometimes required a lot of patience on these meandering country roads. 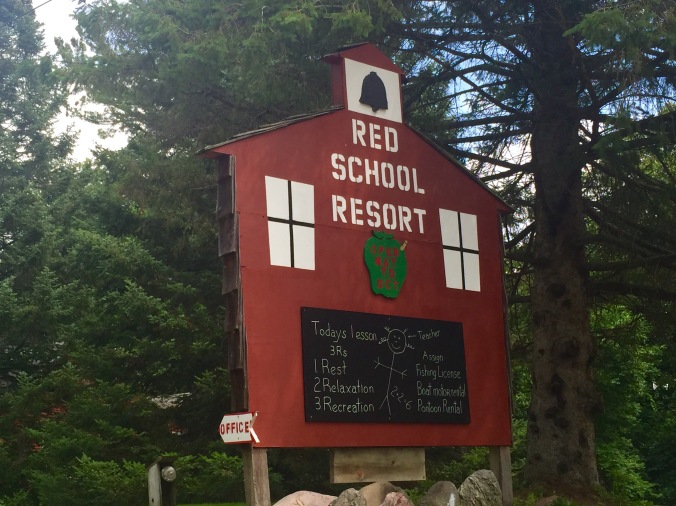 Lunchtime. We purchased drinks at a convenience store in a tiny town called Edgewater and noticed two bike tourists eating lunch in the town park. We chatted with them for a bit. They are a 20-something couple on a tandem riding from Bar Harbor to Portland. They were sort of reticent and did not seem pleased with their trip. They came out of the UP and took the Erie Connector, which is exactly what we plan to do, so their melancholy made us nervous about what’s to come. They also warned us that Ontarian drivers passed them at very close distances, which was interesting because I made the same observation about British Columbian and Albertan drivers back when we were in Washington and Montana. This also made me nervous.

After lunch, we set out to meet our warm showers host, Gerry, about 10 miles away. He was wearing an American flag jersey, so he was hard to miss. He told us that he figures people will give him a wide berth if he wears an American flag and uses a bright flashing light. Unfortunately, that tactic won’t work in Canada, where it seems like we’ll need it the most.

Gerry is a retired businessman and former bike racer. He spends his time organizing charity bike rides, Nordic ski races, etc. We chatted for the 30 miles back to his house, and it was nice to have someone new around to help the miles tick by a bit faster. He also took us on the scenic route through the Chippewa Flowage, which was a gorgeous area that we would have missed had we stayed on route. 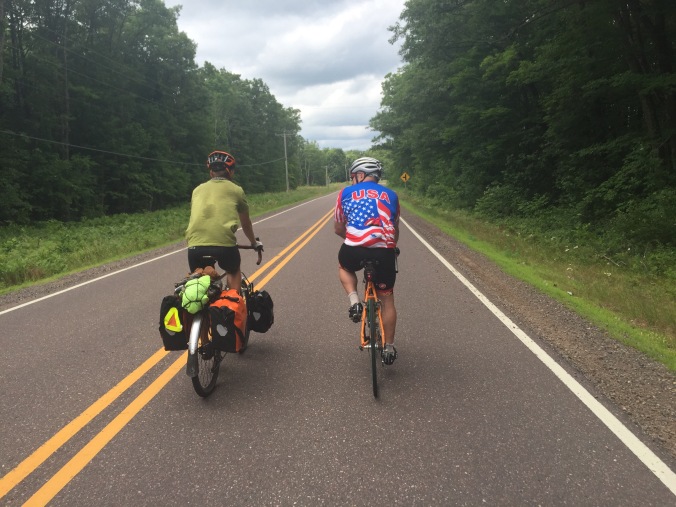 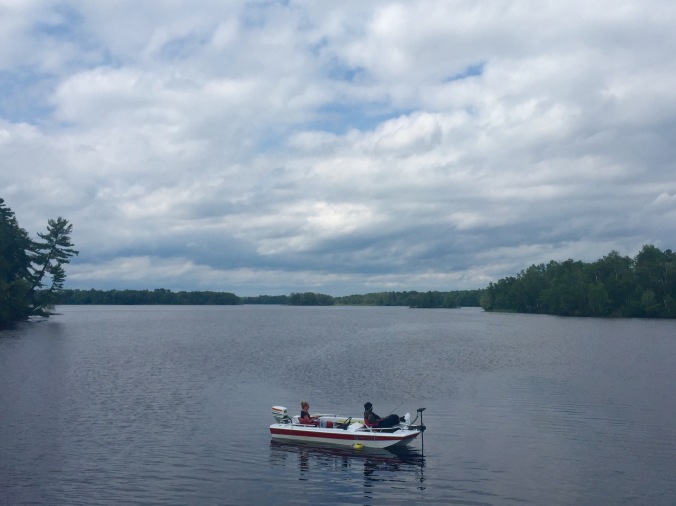 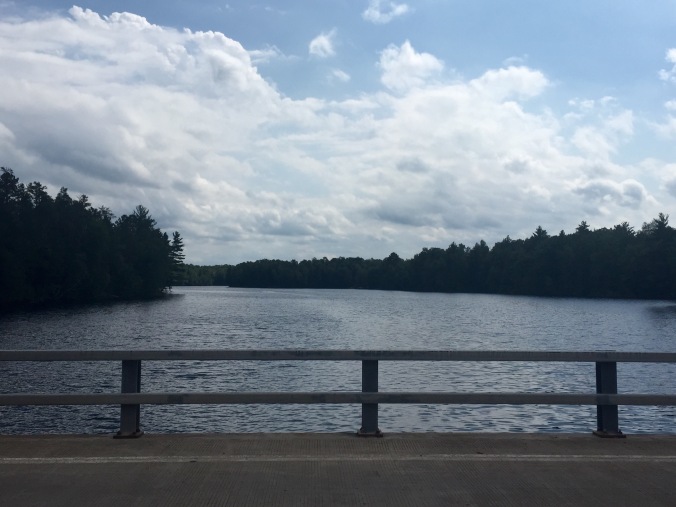 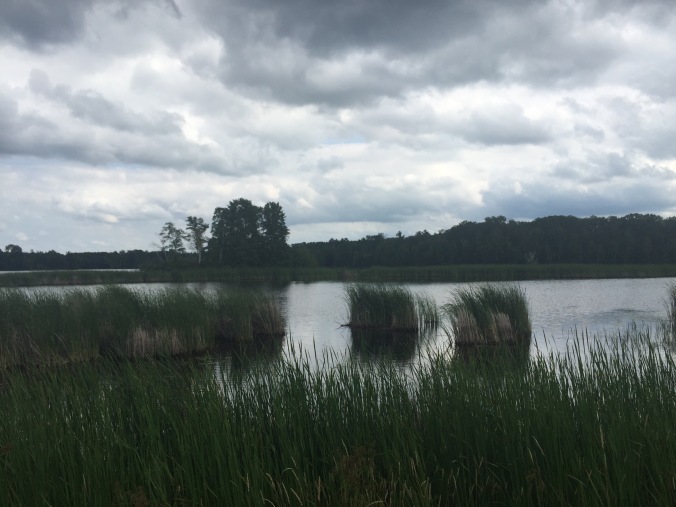 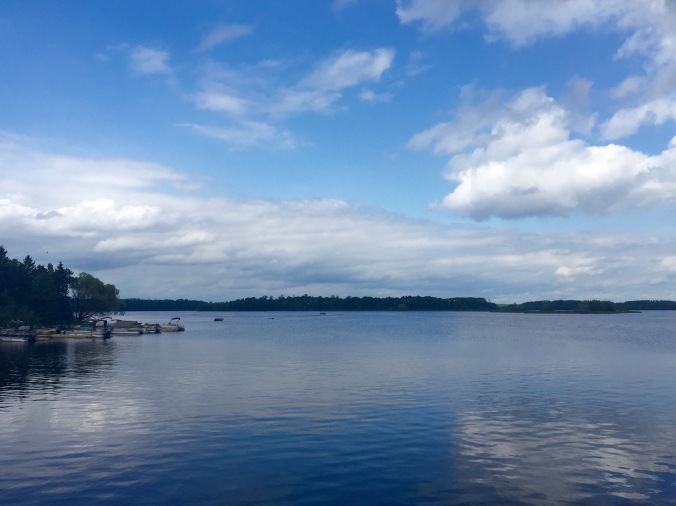 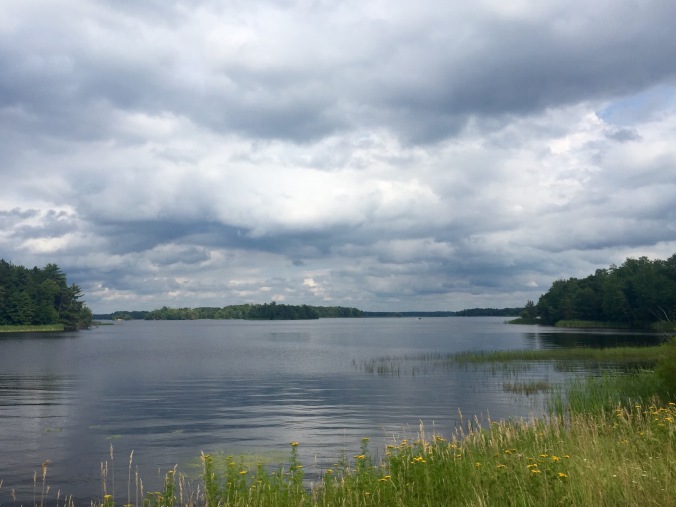 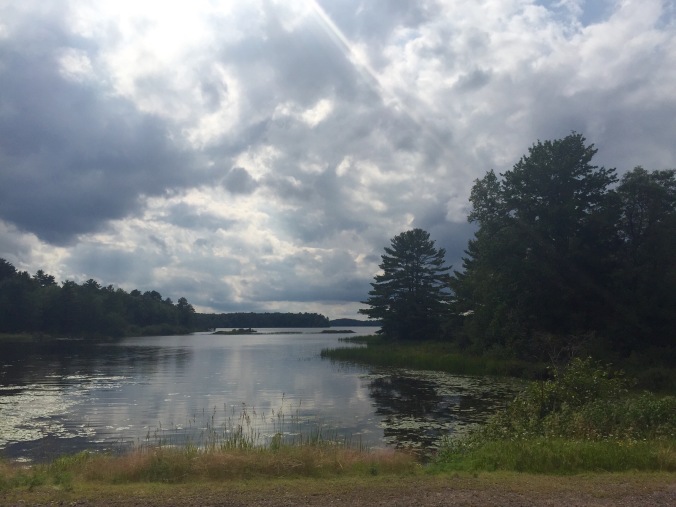 We arrived around 5:30p to Gerry’s beautiful 5-acre compound, which has a white picket fence out front with a flag on each post for each country and state in which they’ve raced bikes. When coming out to meet us, Gerry met another bike tourist named Meng, so he invited Meng to spend the night at his house, too. Meng was there when we arrived, and is a mechanical engineering grad student from China, studying at the University of Minnesota who is spending a month biking around Lake Michigan.

Mary, Gerry’s wife who also raced bikes (and canoes!), got home from work while we sat on the porch to rehydrate.

Gerry has an incredible garage / horse stable / shed in which he has an amazing workout room and an “Italian-style bike shop.” This place was like a toy shop for bike enthusiasts.  Ted quickly took advantage of Gerry’s bike stand to make repairs while I chatted with Mary and Gerry.

We all showered and then ate a Mexican feast with corn on the cob, beef and chicken fajitas, beef tacos, and enchiladas. So much food! Everything was delicious. 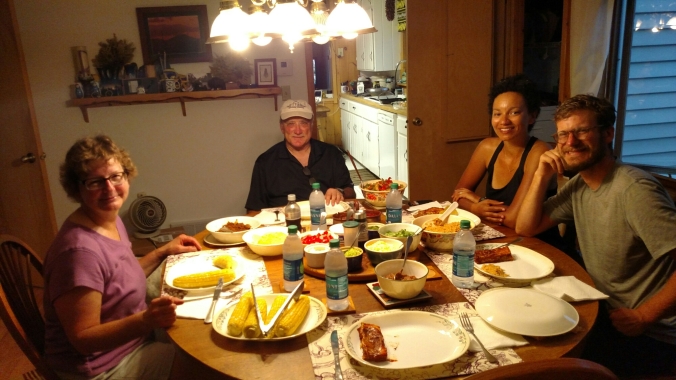 We watched a little of the Tour de France and got a little sad about how slowly we ride / a little motivated by how intense those guys are. Gerry couldn’t bear the fact that all three of us were riding bikes wearing t-shirts, so he brought a bunch of his old jerseys out for us to take! I now look like I’m sponsored by the U.S. Postal Service, but Ted chose a more understated, ventilated jersey.

Tomorrow we’ll bike to a nature reserve on a lake, which we’re very excited about!