Whoever planned the Adventure Cycling Association’s Northern Tier route designed the first week or so of the trip as a test of merit. We have climbed five mountain passes in the last five days (with over 20,000 ft. of total elevation gain), and we are pooped. Our leg muscles are crying out for rest, and, more frighteningly, our knees are hinting that we might just be overusing them a bit.

Now we’ve passed the test. We’re finished with the large passes of the Northern Cascades, and we’re thrilled to move on to some flatter rides.

The day started when we woke up well later than we intended, only to find and amazing breakfast waiting for us: eggs, bacon, huckleberry coffee cake, and huckleberry smoothies. Again, we were floored by Patty and Rob’s generosity. I don’t know if life will ever bring us back to Republic, WA, but I certainly hope to see them again.

The ride out of Republic was downhill for the first half mile to a mile, which we resented a bit because we knew that every foot of elevation lost would only have to be gained again to get to the top of Sherman Pass. Nevertheless, we were happy to spend a mile or two on a lovely paved bike path paralleling the road before we started our climb in earnest. 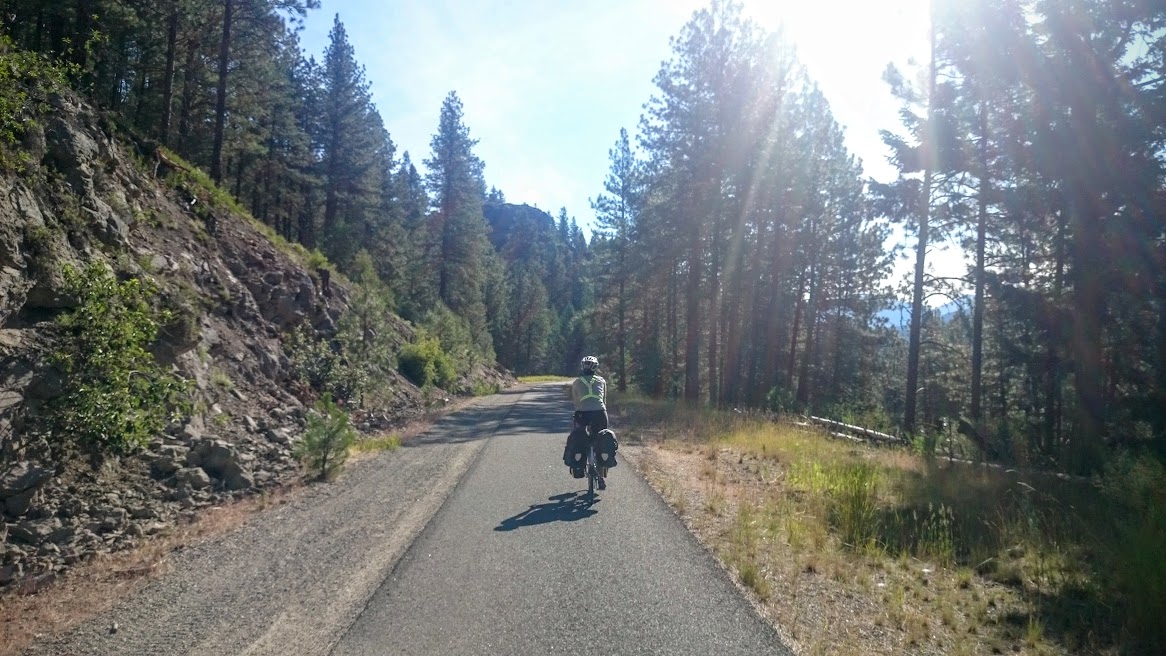 The first couple of miles of Sherman Pass were the steepest, but the climb was unremitting for 14.5 miles. I think that the length of these passes was the most difficult adjustment, mental and physical, that we had to make. We climbed steeper hills and had higher total daily elevation gains on our tour through Southwest Colorado, but we have never tackled such a consistent incline over such a long distance. Climbing over the passes has been at least as mentally exhausting as it has been physically exhausting. We struggled to maintain morale after an hour of punishing effort during which we covered only a little over four miles. Our general response in these situations was to lay our bikes (and ourselves) down in one of the “Slow vehicle turnouts” on the side of the road until we managed to gather up the motivation to start again.

It took us four hours to get the top of Sherman Pass, and we were thrilled to have finished our last big pass in Washington. We sat at the top and had a snack lunch of potato chips, rye chips, apples, plums, peanut butter-filled pretzels, trail mix, cookies, and brownies (Patty, thank you so much). And then we started down.

The descent was even longer than the climb, and it passed through a lovely evergreen forest, tracing a creek down the mountain. It was a very enjoyable descent, but I’ve decided that even the thrill of zooming along at 35-40 mph for 20+ miles is not worth the misery of the over 20-mile climb on the other side. Give me rolling hills and flats, please.

Along the way, we stopped at a historic site commemorating the FDR’s Civilian Conservation Corps, which employed out of work young men during the height of the depression to build roads, trails, and dams, primarily in the national forests. They were provided with room, board, clothing, and a salary of $1 a day, but they had to agree to send $25 dollars a month back home to their families. The historic site was well designed and informative, AND it had a much needed toilet.

At the end of the descent we crossed the Columbia River. The views were stellar, but since we were on a bridge without even a hint of a shoulder, pictures were out of the question. We took back roads through Kettle Falls and pushed through to Colville, where we stopped at Safeway, which was by far the biggest grocery store we’ve seen so far.

There were a number of hills between the Columbia River and Colville. Some were larger than others, and some had accompanying descents. But we took offense at all of them. It didn’t seem fair that we had to climb still more hills after summiting five passes in five days.   But apparently the world doesn’t give a hoot about what we think is fair.

In any case, after stocking up at Safeway we headed out to our final destination: the Bacon Bike Hostel (more on that in the next post). It was only about six and a half miles out of town, but they were all uphill. We were 3 miles in when a car moving in the other direction screeched to a halt and the driver leaned out of the window to talk to us.

“Are you all going to the bike hostel?”

“How tired are you? Are you tired enough to want a ride?”

At this point, I’d like to tell you that we hesitated. That we thought our current exhaustion was less important than the goal of riding every single mile between Seattle and New York City. But the truth is that our answer was both affirmative and immediate.

Our rescuer, whose name was either “Stevens County Troy” or Max, depending on the day, was driving a modified two-door Honda Civic with the rear and top cut out and replaced by a roll cage. Troy is a self-proclaimed “collector of things” and the car was pretty stuffed, but he was determined to make it work. We placed both of the bikes vertically through the top hole in the roll cage and stuffed our bags wherever we could find space among the wide variety of things he was carrying (e.g., car parts, bear skin rugs, loaves of bread, bulk paper towel packs, freshly picked cherries). Then Dani sat in the front seat and I climbed in with the bikes and crouched down to rest my armpits on the roll cage bars.

And away we went, zooming up a few miles of hills in a fraction of the time it would have taken us to ride. We arrived safely at the bike hostel and Troy helped us unload our bikes and bags, and left us with a bag of freshly-picked Washington cherries. Thank you Troy, for providing another random act of kindness that made our day!

We’ve seen a few giant fields of cut trees being soaked by dozens of sprinklers.