If there was ever a time we needed a short, no-wind, downhill day, today was that time. Dani ended up following me down the food-poisoning path last night, so we weren’t in the best of moods when we woke up.

We started very slowly. We didn’t seem to be actively suffering as much this morning (i.e., we weren’t making frequent trips to the restroom), but our bodies seriously ached. We both felt lethargic and struggled to get moving.  Doing small tasks to prepare to go was exhausting and required many breaks of lying down completely still. We had also completely lost our appetites, something that anyone who knows us knows is as common as Halley’s Comet, but forced ourselves to eat a tiny banana to have some small amount of energy for the ride.

Eventually we got ourselves out of bed and packed our things. We left around 11am, or about 3 hours later than normal.

But we were fortunate. Today was always going to be a short day, just 20 miles, and knowing that was a big reason we were able to convince ourselves to get on our bikes. But what we didn’t know is that pretty much the entire ride was downhill. Good steep downhill too. We covered the first fifteen miles in about 50 minutes, and for long stretches, we didn’t even have to pedal.

Which was a good thing, because when we DID have to pedal, my legs felt like they were about to fall off. Maybe that had something to do with throwing up (or otherwise expelling) everything I had eaten in the previous 24-48 hours. 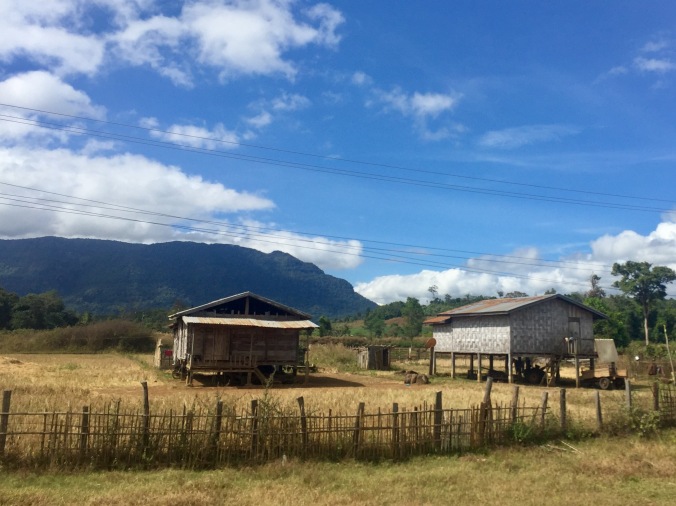 In any case, we made great time to Tad Lo, getting here around 12:20p. We had to find a place to sleep, and we were quickly sold on a guesthouse with cute rooms and a PORCH with HAMMOCKS for $8.50.

Then we lay in the hammocks for an hour or so.

At this point we felt like we had to go exploring, both because we came here to check out the waterfalls in town and because no matter how we were feeling, we really had to eat something.

So we decided that if we were leaving our happy place, we might as well see some of the waterfalls the town is named for (I might be wrong about this, but I’m pretty sure “Tad” means waterfall Lao). We crawled out of the hammocks, got ourselves together, and walked for about twenty minutes to the southern Tad Lo falls. Longest twenty minutes ever. They were nice, and to our chagrin, they were swimmable. It looked like nice swimming too. But neither of us had our suits (Dani asked if we should wear them, and I confidently said no), and even if we did, I don’t think we would have felt up for swimming anyway. 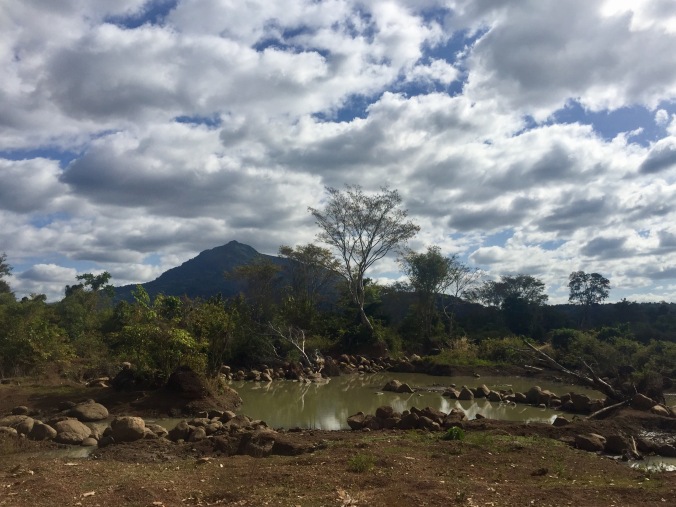 So we walked down a little path from the falls that let us out at Tad Lo Lodge, the swankiest place in town. We didn’t really enjoy the milieu, but we liked the deck overlooking the river, and we were wary of food in general, so we thought swanky was a safe bet. Also, pro tip: we saw this in Costa Rica too, but if you go to a touristy-type swanky place in foreign country and then order traditional food of said country, the price is actually pretty reasonable. So our meals were about a third as expensive as the western food on the menu.

But, we were both feeling so queasy that, for the first time in my memory, neither of us finished our food. Dani has instilled in me a strong “clean plate club” ethic. But today we just couldn’t. Ugh.

After lunch, we walked back to our hotel and got back into the hammocks, lazily looking out on a field where a family herded their cattle.

After a few more hours, we felt a little better, so we decide to venture out once again. We walked across the river, checked out the northern falls, and stopped in at a cute little guesthouse for a fruit smoothie and an vegetable omelet sandwich.

Then we made it back to the hotel for the night, watched a movie on our laptop (sick day! And Dani let me choose, so obviously it was a Disney movie), and hunkered down for bed just before 9p.

Tomorrow is a long day for us. 55 miles, and I don’t think we’ll have the same downhill luck.  But we have a plane to catch the next day, so we don’t really have any option except to make it. So hopefully a few meals and another good night of sleep will carry us through.