Well, it turns out that jet lag is a real thing.

Danielle had heard that the way to avoid jet lag is to survive the first day and go to sleep at a normal time the first night. We did that (we went to bed at 9:45p), so I thought I was fine. But then I woke up at 2:45a clear eyed and wide awake.

So that was a bummer.

It wasn’t actually all that bad though, because our alarm was set for 4:45a; we were waking up early so we could watch the sun rise at Angkor Wat.

Many (most?) people pay someone to take them around the various temples, either in a tuk tuk or in a van, but we’re here on a bike tour, so we rode our bikes!

We were on our way by about 5a, and we joined the stream of traffic heading north out of Siem Reap. And I mean it was a stream. Lots and lots of people.

The ticket office for Angkor Wat used to be right off the main road, but apparently it was recently moved to a new location 3K east of said road. In a fit of logic and common sense, we decided to listen to the giant sign on the side of the road and not what we read on the internet. We (mostly I) don’t always make smart decisions, but we got this one right.

After the 6K detour to buy tickets, we rode the rest of the way up to Angkor Wat, arriving right as the sky was starting to lighten. We walked into the temple complex and found a place to stand among the hundreds of other people.

This paragraph might overstate things a bit. I think that sunrise at Angkor Wat used to be a peaceful, spiritual experience. It wasn’t very crowded (it became a national monument relatively recently; it was for quite some time just sitting, ignored, in the Cambodian countryside), and I can see how watching a sunrise here could be magical. I mean, there wasn’t even a spectacular multicolored sunrise on the day we were there, but the sillouette of the temple and palm trees against the rising sun was stunning.

But it is hard to find the magic in the midst of all of this: 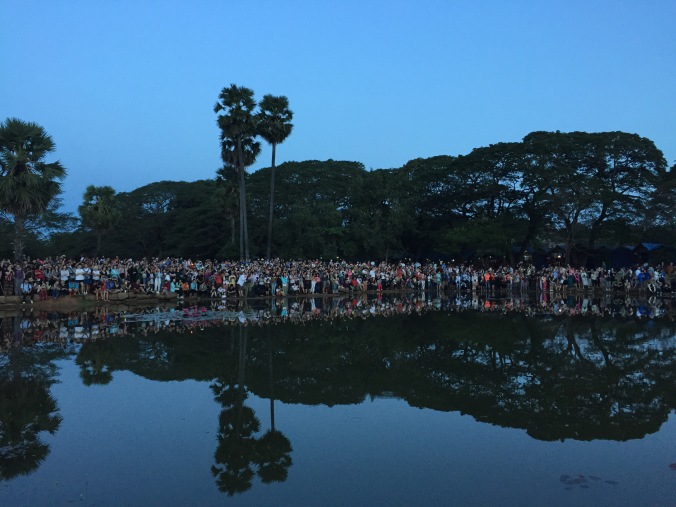 It was still beautiful, don’t get me wrong, but I’m getting old and grumpy, and I don’t like being around this many people.

This was a theme for much of the day: too many stinking people. But here are a few pictures of Angkor Wat without people in them. 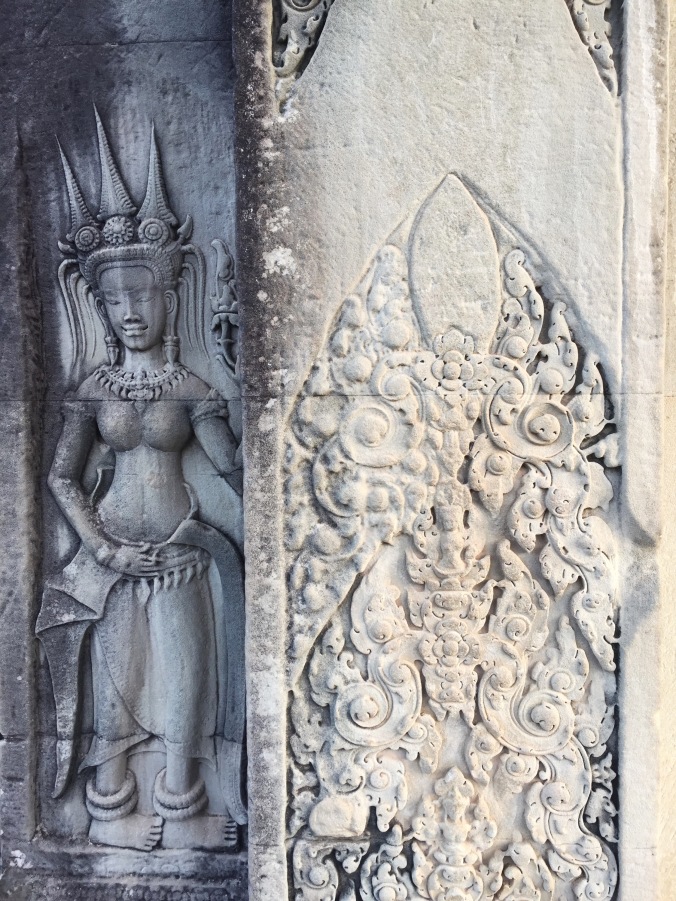 After exploring the Angkor Wat temple for a bit and choking down some horrid, overpriced egg sandwiches, we set off to the next big temple area: Angkor Thom. Here’s Dani about to enter the city (you can see the gates ahead) alongside an elephant. 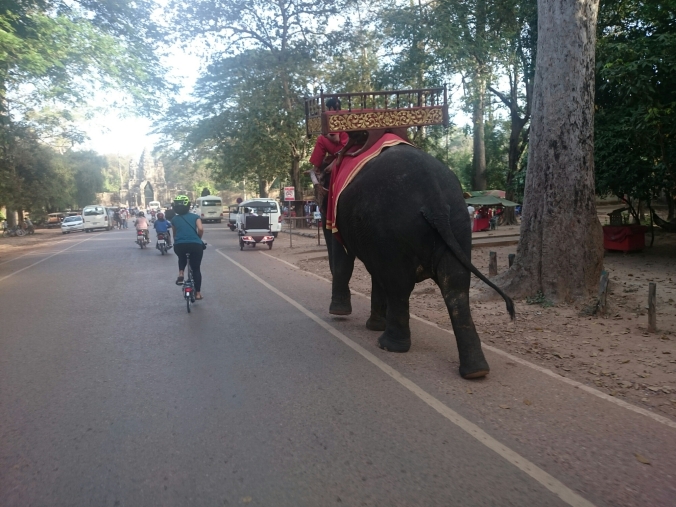 Bayon Temple was originally built as a Buddhist temple, but was used by later kings to suit their own religious preferences. It is known for the many large, smiling faces looking out in all directions from the temple towers. 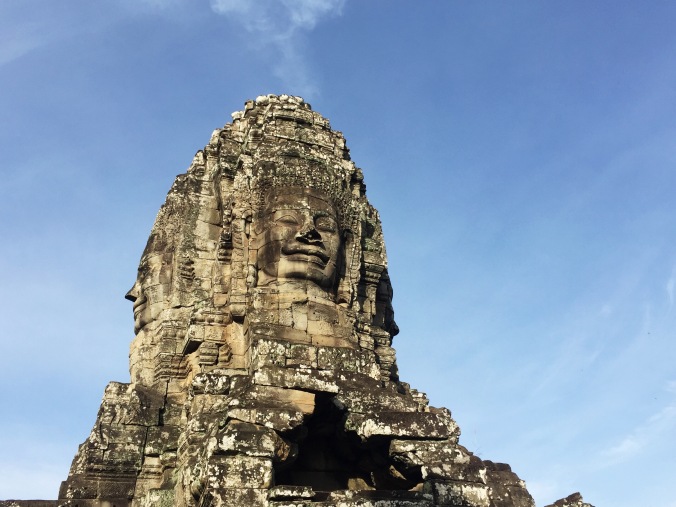 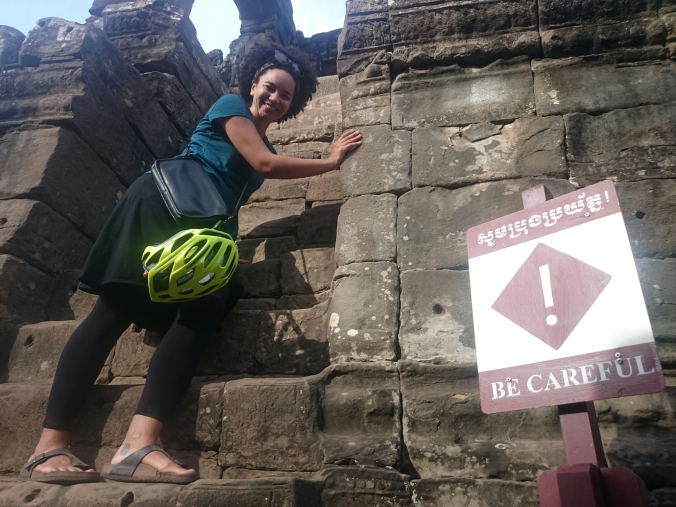 Baphoun might have been my favorite temple, and maybe that was because it was so much less crowded. It is currently being restored, but we were able to climb all the way up to the top and were rewarded with some amazing views. 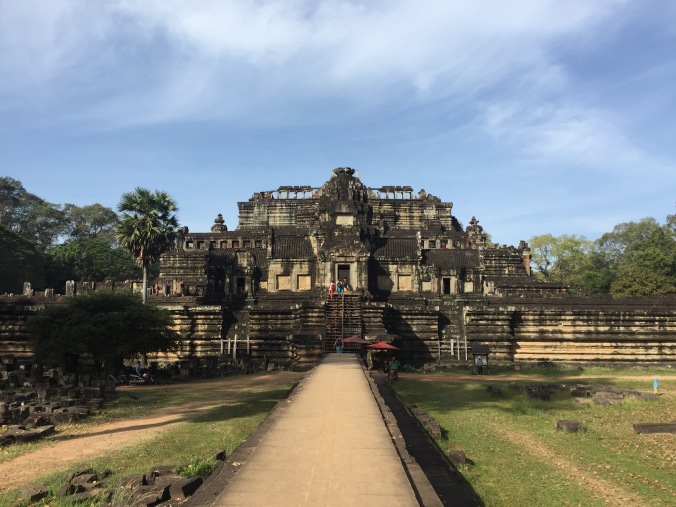 After climbing back down, we walked through the woods to see a few other ruins, and then came upon the elephant terrace. This was where the great Khmer kings received important visitors to the capitol city.

Then we got back on our bikes and rode east. By this time, it was getting very hot, and since I hadn’t slept a lot the night before, I was starting to struggle.

We stopped on the way and has passion fruit smoothies and a fresh pineapple. I love passion fruit. Love it enough to occasionally spend $3 on one tiny little guy at our co-op. So you can imagine my delight at getting a large cup of essentially passion fruit juice blended with ice for fifty cents. 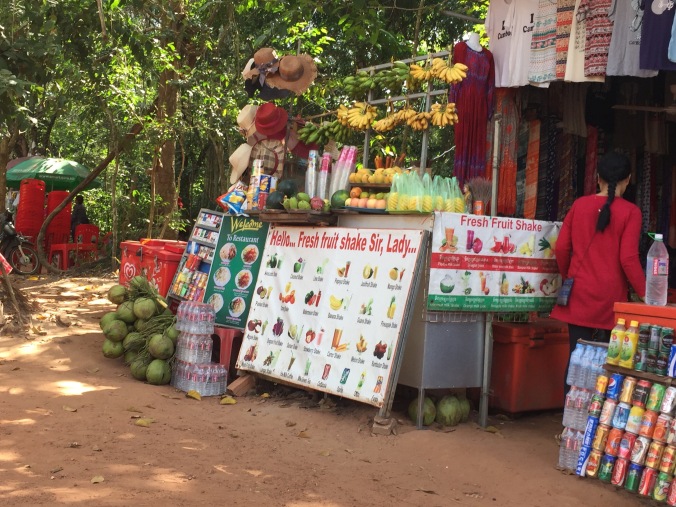 As we sipped this sweet nectar of the gods, we decided to go to one last temple before heading home: Ta Phrom of Tombraider fame (full disclosure: I haven’t actually seen Tombraider. But the temple is referred to as the Tombraider temple, so I guess it was a location in that movie).

This temple was REALLY cool but oh my goodness was it crowded. Walls of people being directed along tight temple corridors like cows headed to the slaughter. When we found a spare moment with a little breathing room, we were able to appreciate the awesomeness of an ancient temple being slowly taken over by nature, with silk-cotton and strangler-fig trees growing over the walls and around the buildings. But then the moment passed, and we were surrounded once again. (Although you’ll notice that Danielle did a fabulous job of finding ways to take pictures that made it look like were alone. Looking at these pictures, I’m starting to second guess my own memory.) 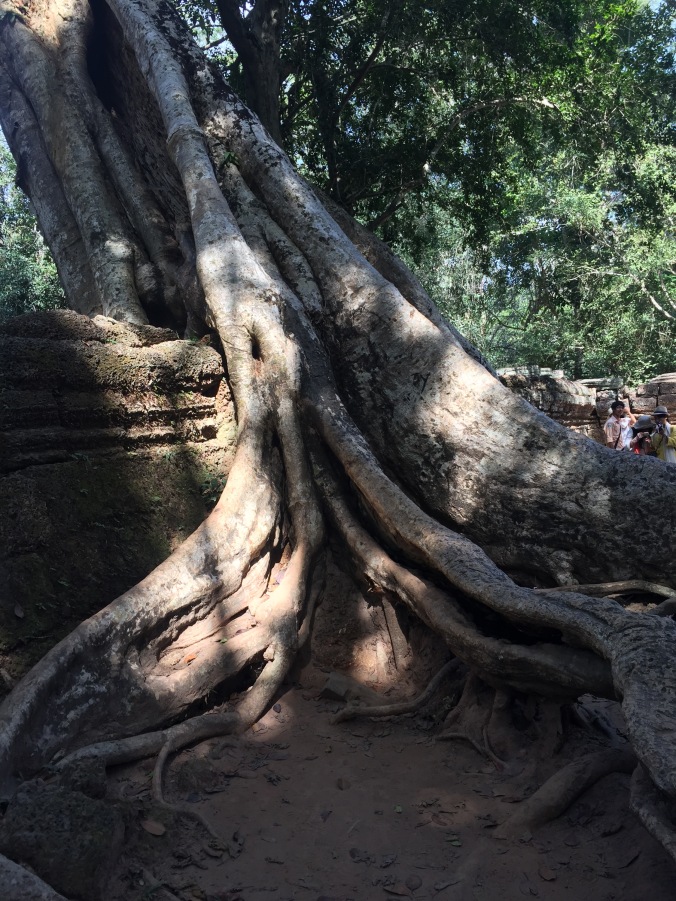 After Ta Phrom, we headed back toward our hotel. The ride could have been very pleasant, but the traffic was insane. Motorbikes, tuk tuk, vans, buses…. We were always being passed by something, and ended up spending almost the entire ride home sucking down exhaust fumes.

We made it back to the hotel around 1p and decided that we were done with the traffic, the noise, and the exhaust-and-burning-plastic smell of Siem Reap. So we spent the rest of our last day at the hotel. We swam, ate some delicious red curry by the pool for lunch, enjoyed some out of this world passion fruit smoothies (we each ended up having two and a half smoothies today; the ones at the hotel were so delicious!), took a little nap, prepared for our trip out of Cambodia, and went to bed early. It was a lovely, relaxing way to spend the second half of the day. 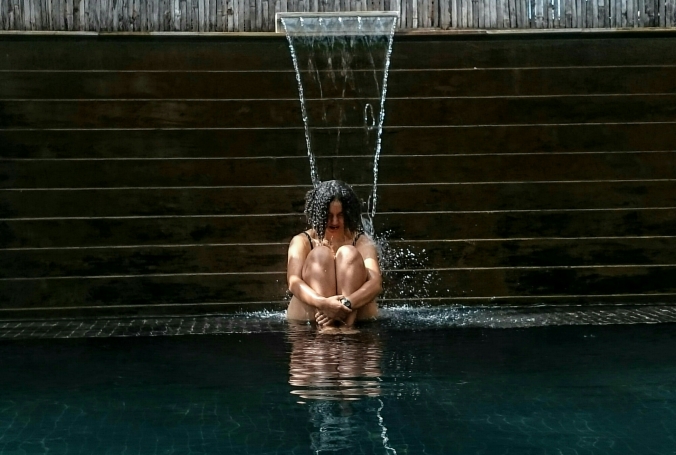