We woke up, ate hotel breakfast, and packed up to ride to the airport. I was feeling nauseated today (again about a day behind Ted), so we didn’t spend any time exploring Pakse. We did stop by Ted’s Italian restaurant to see if they were open for another plate of bolognese, but they weren’t.

When we got to the airport, we packed up the bikes, checked them in, and sat around for a long time. Then we had two uneventful flights and landed in Luang Prabang just after sunset. As we approached Luang Prabang by plane, the scenery became stunning. Rolling green mountains with rivers running through them and small villages dotted throughout. Our bikes made it through to Luang Prabang unharmed, and we put them together efficiently as many people gathered around to watch in amazement. We’ve got a really good system. We’ve each adopted our own responsibilities, and we can unpack and assemble our bikes and pack our bags without saying a word to each other and without any idle time (from Ted: although I haven’t quite figured out how to get the seats at the correct angle without testing them, so they were a little uncomfortably . . . up for the ride into town). 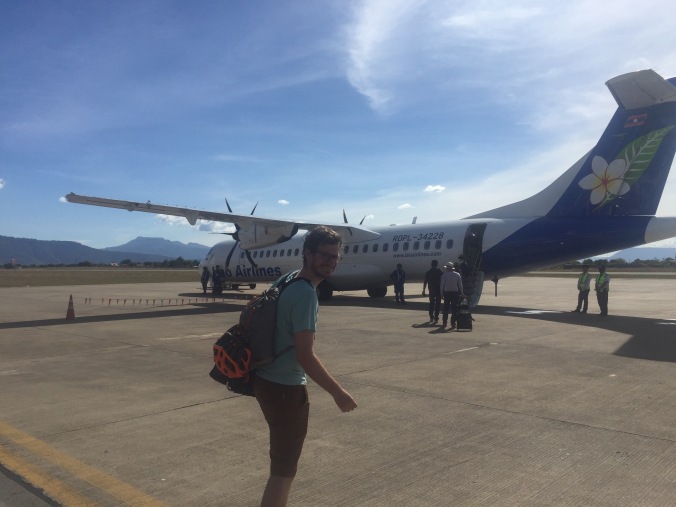 It started sprinkling on our ride, which sort of added to the charm of this gorgeous city we were cycling into. At night, many streets are lined with twinkle lights and paper lanterns, people are wandering by foot and bike through the sinuous streets and alleys, and the beautiful Lao French colonial architecture is striking despite the darkness. And oh my goodness, this city is bursting with tourists – very different from anything we saw in southern Laos.

We got to the adorable Khemkong View hotel on the Mekong, and checked in to a tiny room with a French flair. We immediately went out to explore the city and find some food. I was feeling sick all day, but got my appetite back and had a specific craving for chicken vindaloo, so we went out in search of it. Ted found it on the menu at a very crowded restaurant. After we ordered, a couple from Northern California asked to share our table because it was so crowded. We had a nice conversation with them and were happy to have the company. Ted had a new, obliging audience for his soapbox speeches on the failure of democracy, the imminent fall of the republic, and the ills of gerrymandering. Real lighthearted stuff, but they were sympathetic.

Afterwards, we went to a gorgeous bar / restaurant called Tangor that we were told had delicious cocktails, and ordered what turned out to be delicious cocktails. I ordered a chocolatey espresso beverage and Ted ordered a mojito. We also got ceviche, a Laos interpretation that replaces cilantro with lemongrass. It was wonderful! The bar also looked like it was plucked out of Brooklyn. Most of the waitstaff were French men with handlebar moustaches and hipstery clothing. The owner is French, too. Again, a very different scene from southern Laos, but not unwelcome!

After this, we wandered the main street, Th Sakkarin, a bit. There weren’t a ton of people out thanks to the light sprinkle. Then to bed, but I struggled to fall asleep thanks to the espresso.

I heard a lot about the abundance of good chocolate croissants and quality coffee here in Luang Prabang, so we headed to Le Banneton cafe to get breakfast. Delicious, as expected! This is the first chocolate I’ve had since the Kit-Kat we got on the airplane over, which must be some kind of record for me. We then went to Wat Xieng Thong, a famous 450-year-old temple with many glass mosaics, to explore. Everything was gilded and intricately designed. 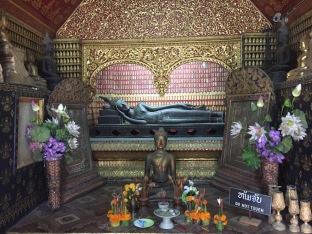 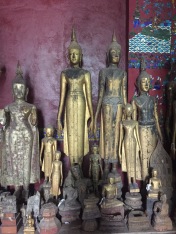 The craftsmanship puts into stark relief all of these slapdash modern buildings made of cheap materials we’re throwing up around urban areas in America. They’ll throw some cheap, plastic looking building up next to these beautiful brownstones in our neighborhood and it just makes you wonder why people don’t build things to last anymore.

Anyway, then we headed to one of the two bamboo bridges in town to cross over to a local village. It was an experience very much geared toward tourists who wanted a “taste of local life” or whatever, but we still enjoyed it despite its voyeuristic nature. It helps bring income to the village, so hopefully it’s more good than bad. And I kept telling myself that there are walking tours of our neighborhood in Brooklyn that essentially serve the same purpose, and they don’t bother me, so perhaps this doesn’t bother the people living in this village? 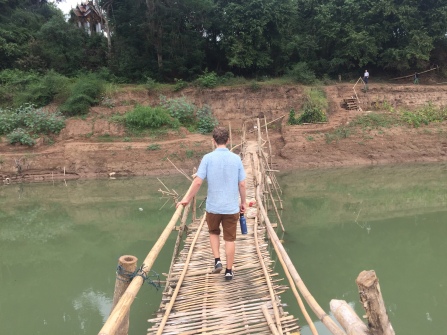 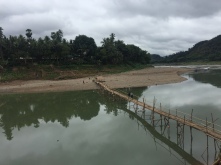 We came across some ladies weaving beautiful silk scarves about 300m in. Their workshop was in a stilted, open-air wooden structure on the Mekong — some enviable working conditions! Each weaver can complete three of the simpler scarves in a day. And this doesn’t include the time spent spinning and dying the silk thread with natural dyes. So much work goes into each hand-woven piece, and yet you’ll see people aggressively haggling for scarves at the market. Such a shame — these artists deserve every kip!

We wandered around the village a bit more, then headed back to wander around Luang Prabang. As gorgeous as this city was at night, it’s triple gorgeous during the day. The architecture! The winding streets! The flora! It is paradise. We had heard that some self-proclaimed “experienced backpackers” think Luang Prabang is a little fake and overrun with tourists — like Lao Disneyland — but first of all, these vagabonds are also tourists so where do they get off being so judgmental, and second, there are Lao people living and working here so it’s a little insensitive and ignorant to call their lives fake. Whatever this city is, we love it all the same. And frankly, I’m getting a little sick of the sanctimonious attitudes of a lot of so-called experienced backpackers. 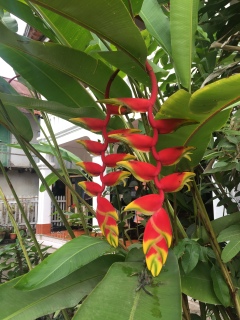 We got a little hungry wandering the streets, so Ted suggested that we eat at this hole-in-the-wall noodle restaurant. Every time we’ve walked by, we’ve seen young, hip Chinese tourists eating here, which I take as a good sign. This place is easy to miss and has literally five things on the menu: Three types of noodle soup (beef, chicken, or pork) and two other types of soup. No prices. When we got our soup, we quickly realized that this was the best noodle soup we’ve had in the whole country, by a mile! As we sat in the restaurant, several western tourists passed by and were apparently put off by the (lack of a) menu because they didn’t stop in. But I wished I could convey to them somehow that they should eat here. It was so incredibly delicious. So if you’re ever in Luang Prabang and want authentic noodle soup, eat at Toutu Restaurant.

Next we got our very favorite beverage — a passion fruit smoothie — and climbed Phou Si, a small mountain/temple in the middle of town. There were incredible views in all directions at the top, and lots of people taking selfies. We went down on the other side, and saw a bunch of Buddhas covered in gold leaf, a cave, and an imprint of Buddha’s foot. 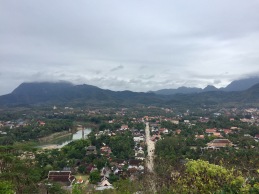 We then walked along the Nam Khan river and back towards the Th Sakkarin, and then stopped in at Chang Hotel to get some coffee and a delicious almond croissant for a snack. The pastry scene here is making life very nice.

After a little more wandering, which I could do for days here without any other agenda, we hopped on our bikes to go to Ted’s special request for dinner, a place called “Secret Pizza.” That’s right, more Italian food. I’ll allow it, though, because he acquiesces to all of my whims. And this place is pretty cool. An expat missed good pizza, so he built a brick oven and started making pizzas in his backyard for other expats, and word got out that they were good. Tourists slowly started trickling in, then trip advisor and lonely planet got wind of the place, and, well, it’s no longer a secret. It was phenomenal thin crust pizza in a beautiful setting, so it’s no wonder it is so popular despite the fact that it’s not walking distance from old town.

We then went to the night handicrafts and food market (and I got a piece of chocolate cake!!!), then we headed home and went to bed after a long, exhausting day. Half a day here, then off to Kuang Si Waterfall tomorrow!