We got a slow start this morning because all we really had to do was head to Vat Phou (an ancient temple) and get massages. Hard life.

We ate breakfast at our hotel and headed to Vat Phou, which was about 12k away. The ride was nice, and a lot of tourists rented bikes to ride to the temple, so we had company.

Vat Phou is a Khmer temple and complex  (built by the same Khmer kings who built the temples at the Angkor Wat complex) on a mountain and a UNESCO world heritage site. The structures that remain on the site date back to the 11th-13th century, but the site has had a temple on it since the 5th century. It’s situated at the base of Lingaparavata mountain (now called Phou Khao), so named because the top is shaped like a linga, which is one of the forms the Hindu god Shiva takes. Thus, the mountain is believed to be sacred. There’s a constant stream of water coming down from the mountain, which is also believed to be sacred. 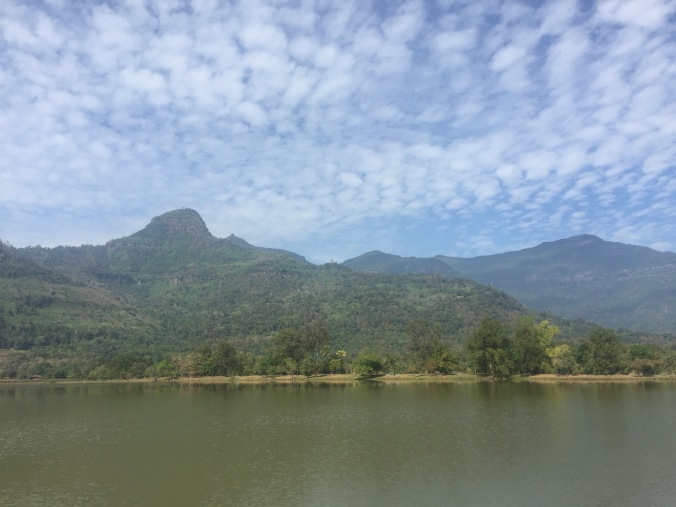 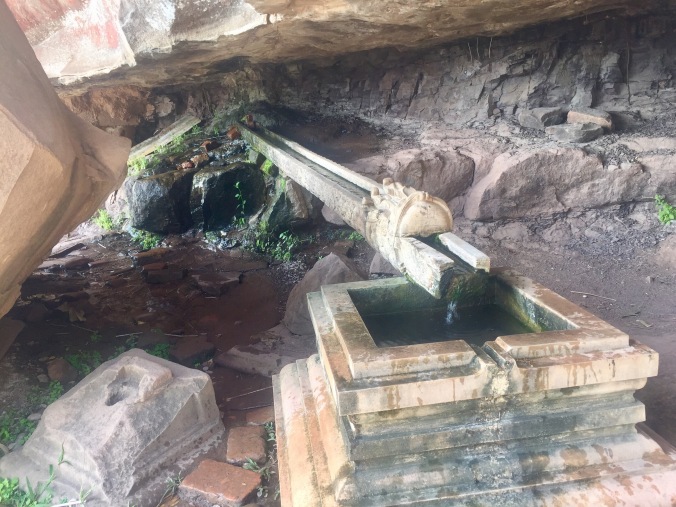 As you approach the temple, there are two large reflecting pools with cows grazing around them, then you get to two symmetrical buildings, the function of which is unknown. 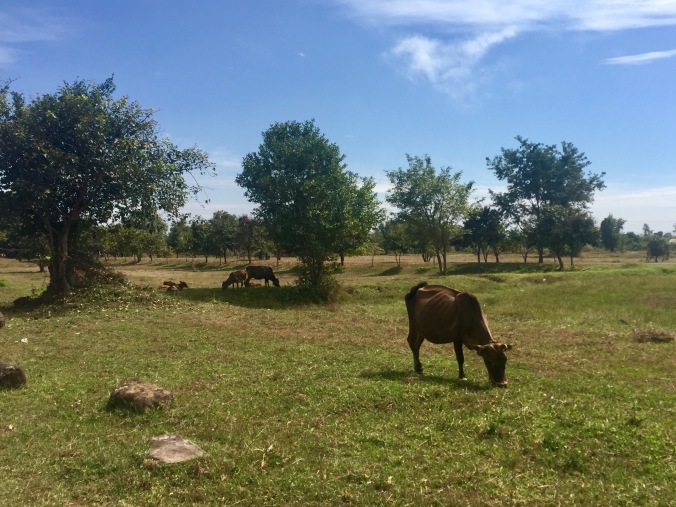 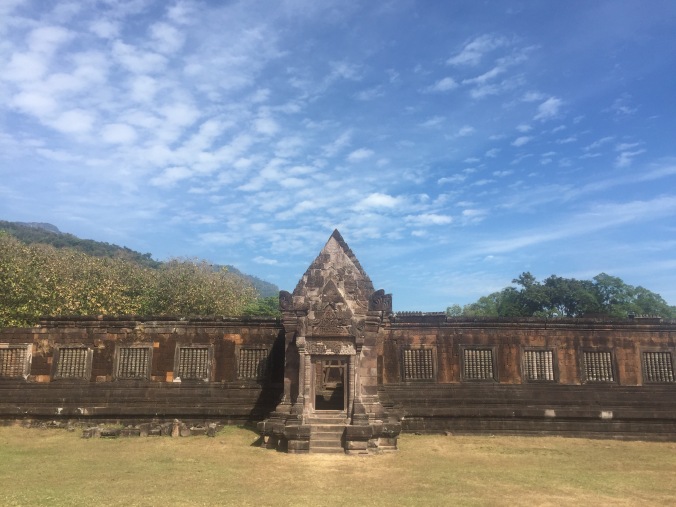 Then starts the gorgeous climb up to the temple: 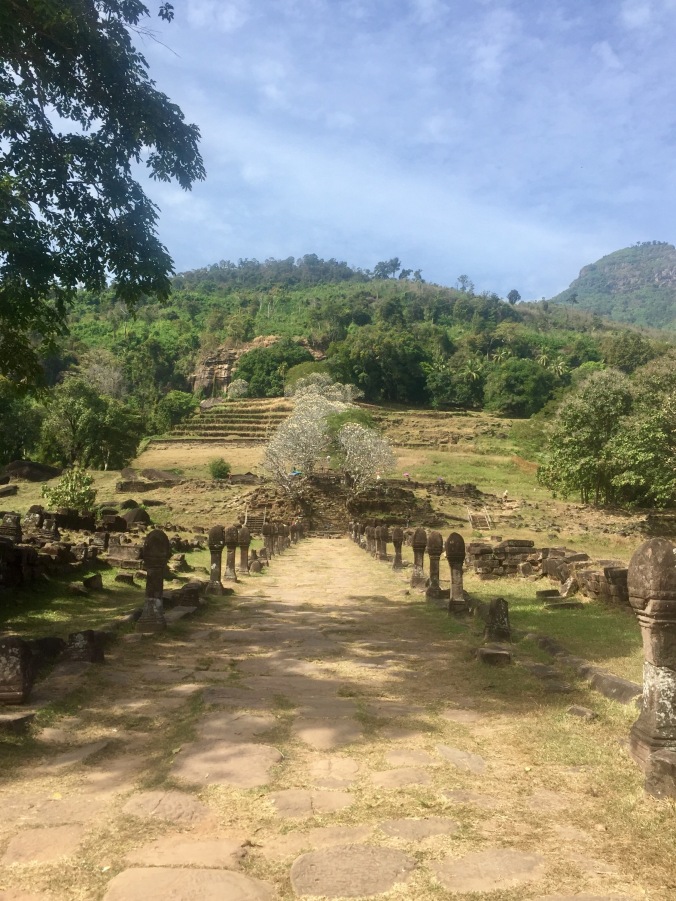 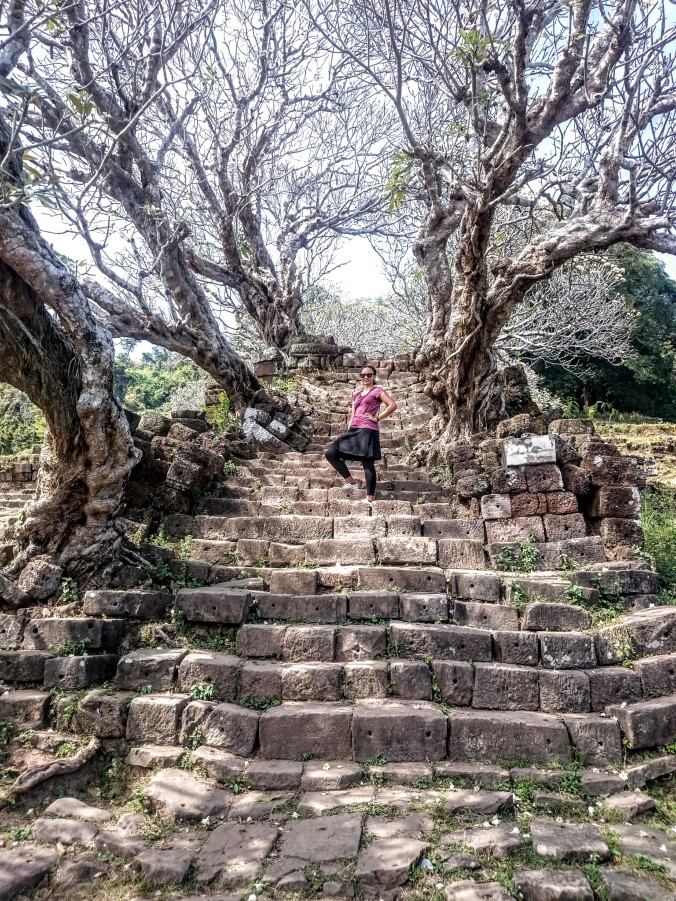 The temple has not been restored, but there’s been a modern Buddha added, as well as a tin roof to protect it. Along with the remaining structures, there are cool carvings of elephants and a crocodile in boulders. The crocodile carving is believed to have been the site of an annual human sacrifice (the crocodile is the size and shape of a human lying upside down). The view of the surrounding area, which was the ancient city of Shrestapura, is pretty cool, especially when you think about how it must have looked as a highly populated city. 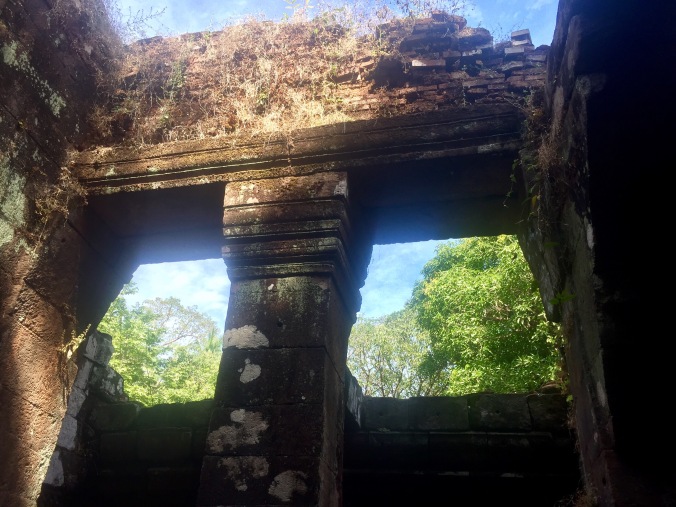 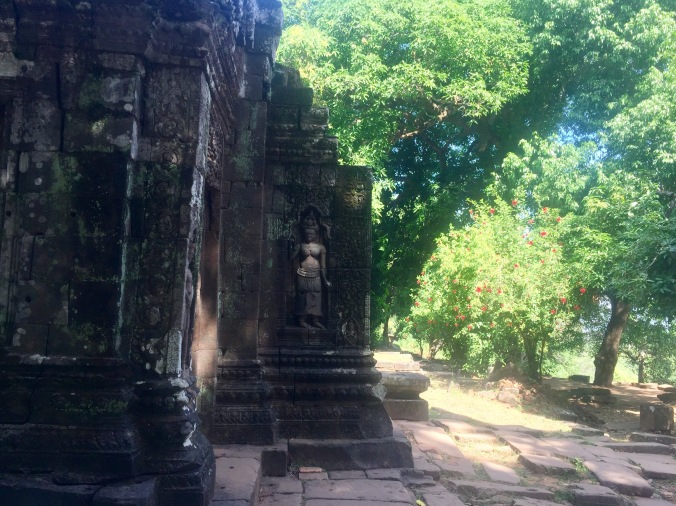 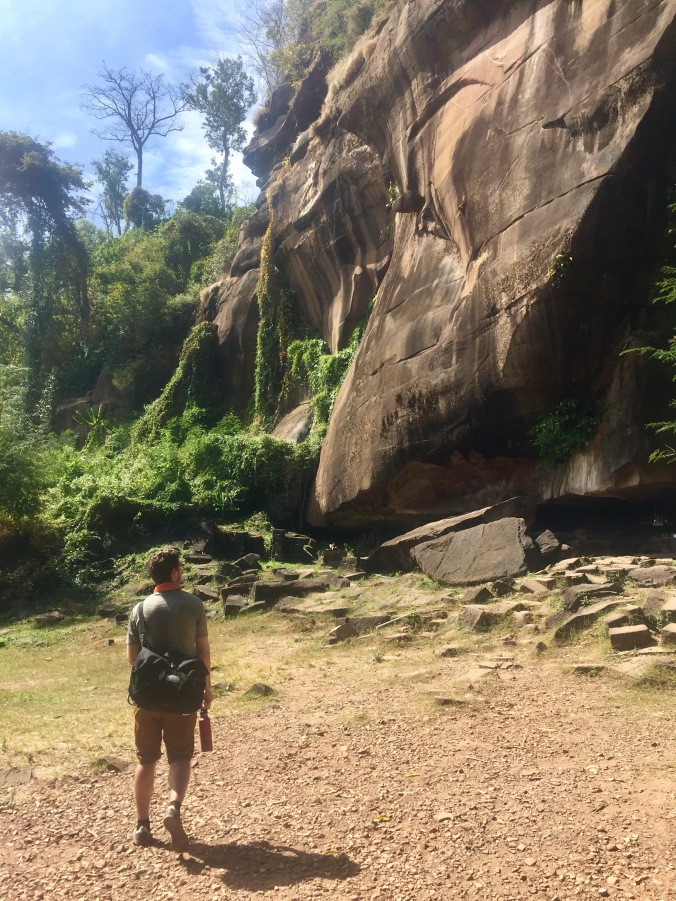 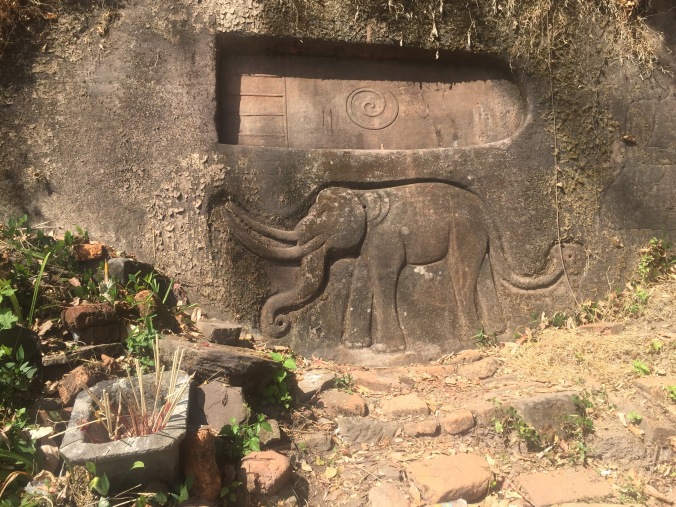 We headed back down to explore one of the lower structures, and angered a little green snake. 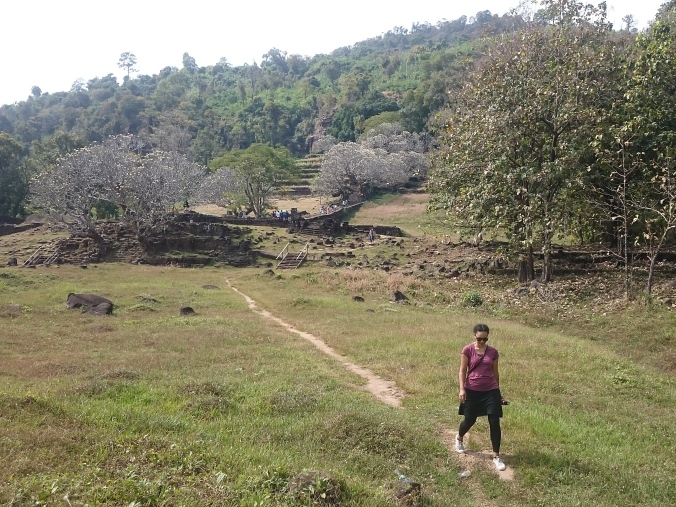 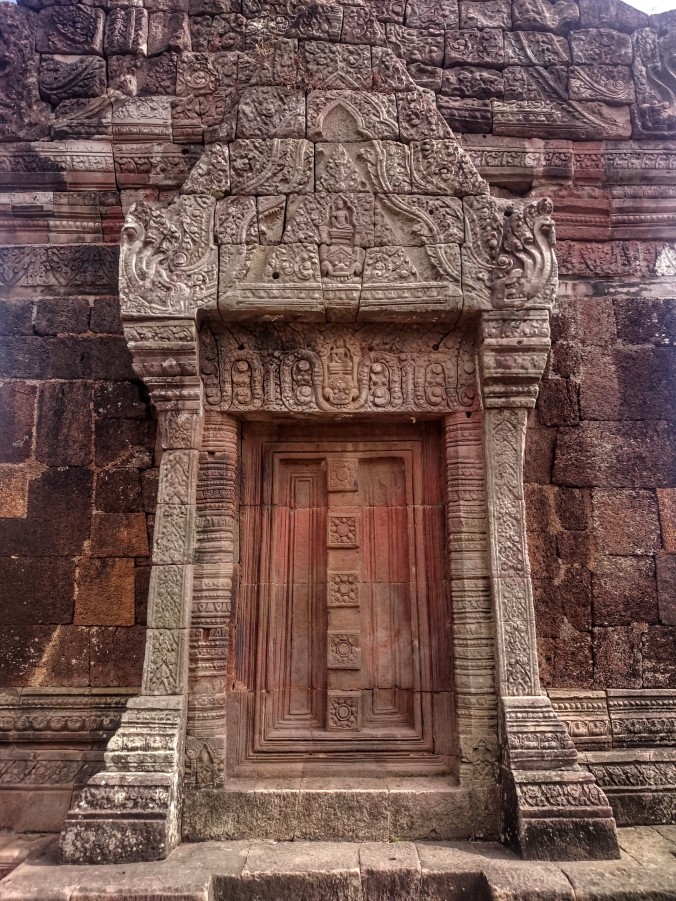 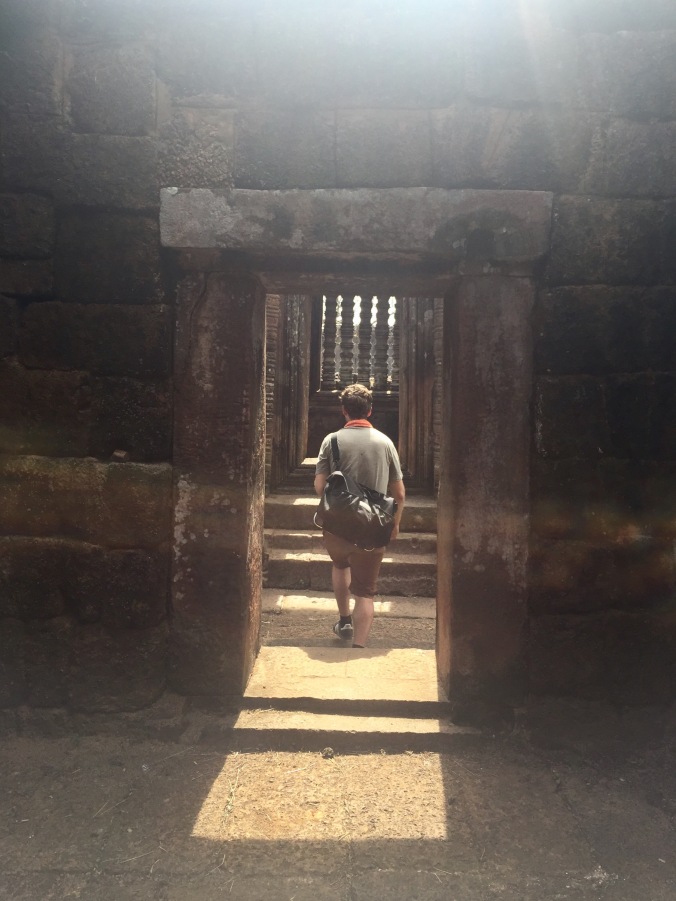 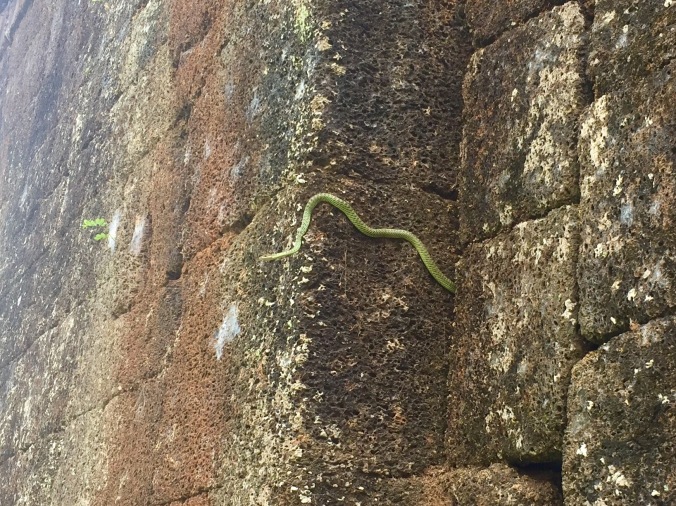 We then headed back towards town and ate at a nice little restaurant at a lovely guesthouse that doesn’t seem to have any guests. It’s a little out of town, but if you come to Champasak, you should stay at the Khaimkhong guesthouse. The food was great, staff was kind, and the grounds were beautiful. 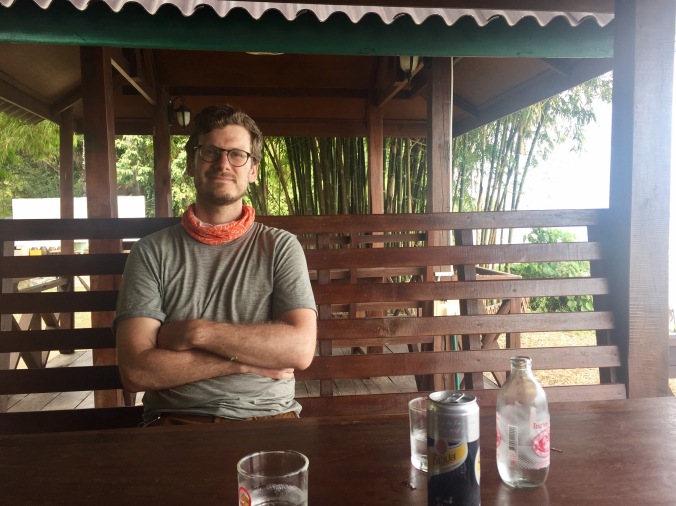 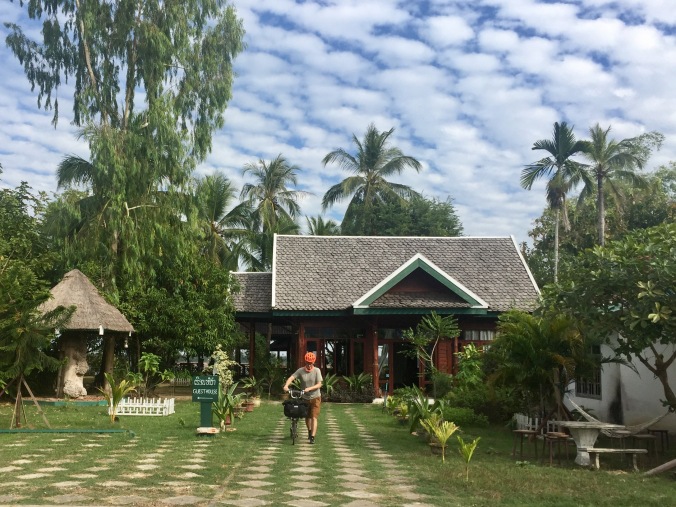 We headed back to town, walked around to look at the cool French colonial architecture and brightly colored houses, then got massages at the Champasak Spa, which were wonderful. Then we headed to dinner and then to a show at the Champasak Shadow Puppet Theater. 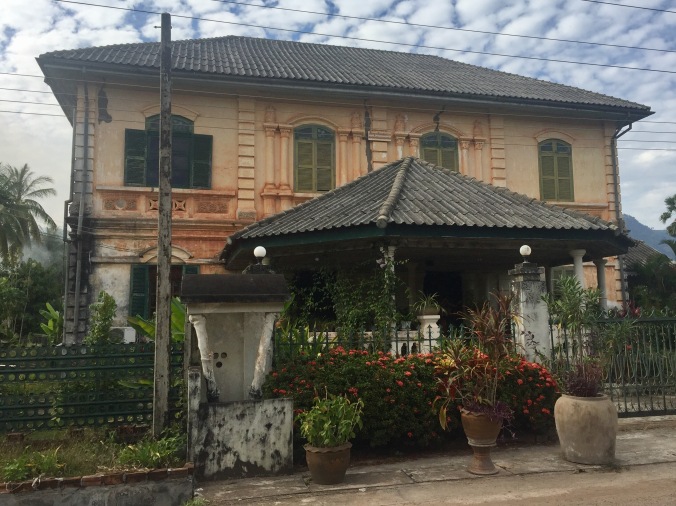 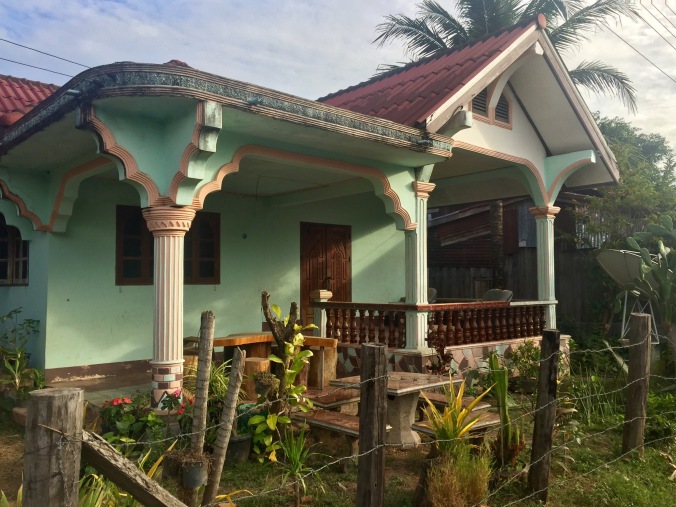 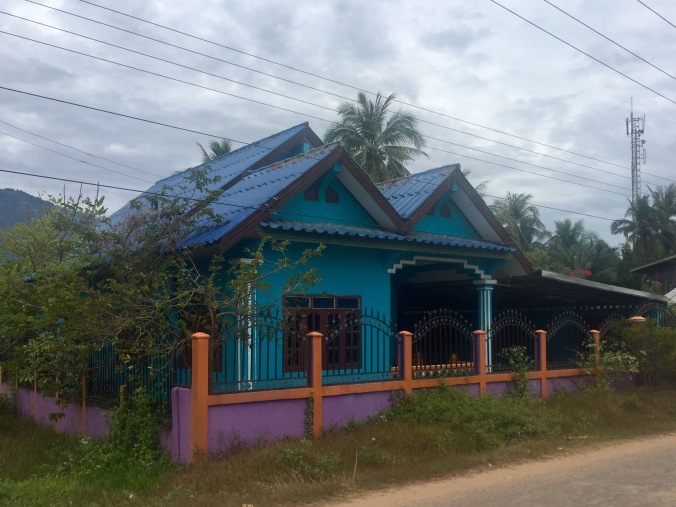 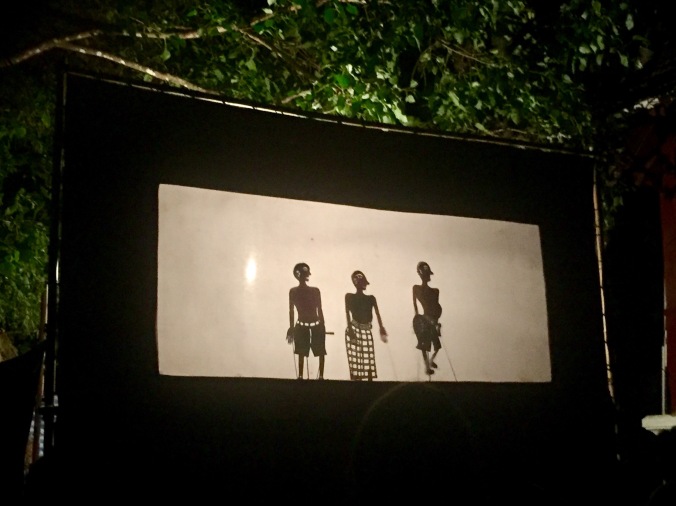 Shadow puppetry is an ancient art form that a small group of artists and musicians are reviving in Champasak. The puppets themselves had been kept for some significant number of years by local buddhist monks (our host, a Frenchman transplant to Champasak, spoke good English, but he left a few gaps), before they were given to this group around 8 years ago.  There was a group of musicians playing Lao folk music (called Lum Si Phan Don), as well as puppeteers and voice actors.  The music was great, and the show was fun to watch. Our host explained the story (an adaptation of the Ramayana) in English so we could follow along pretty well. The puppeteers popped out at the end to show us how the puppets look and how they operate them. 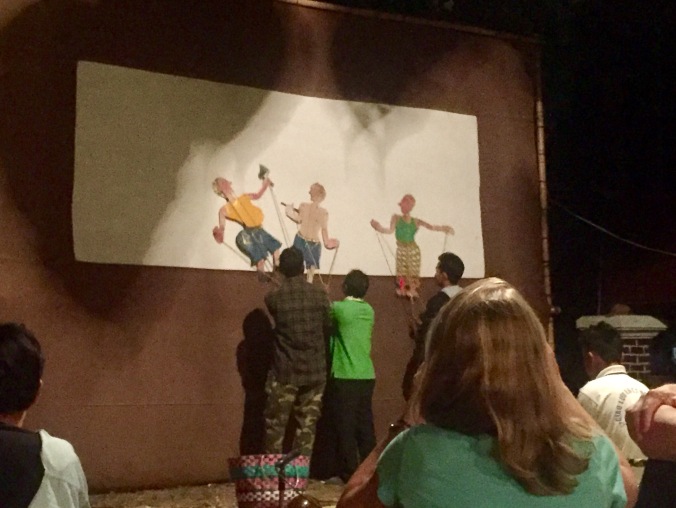 Such a cool experience! Off to the Bolaven Plateau next, land of coffee plantations and waterfalls.