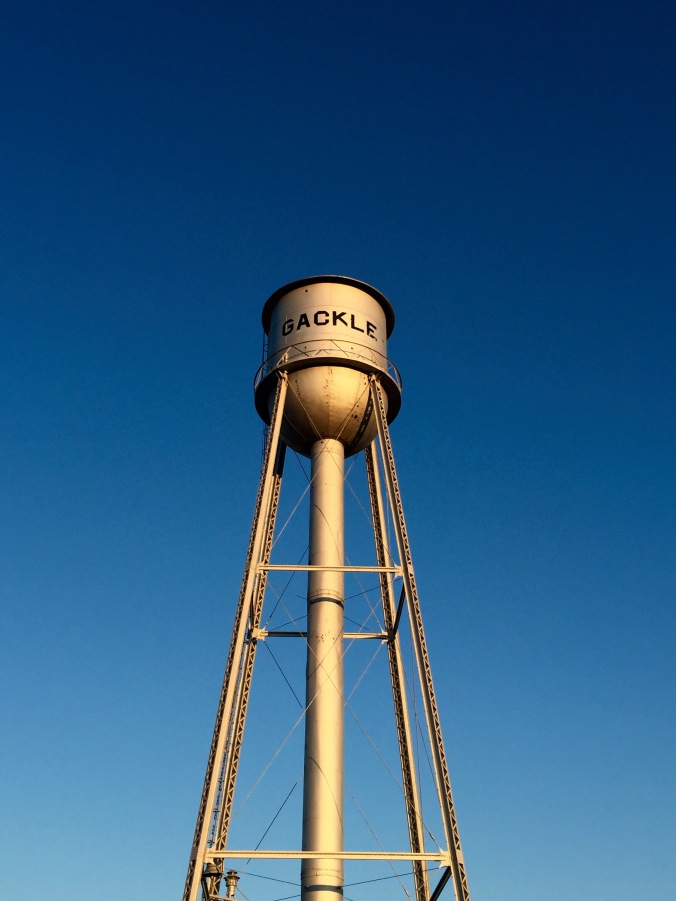 We rode really far today. Just shy of 130 miles, all the way to Fargo!

We got a pretty early start this morning, leaving the Honey Hub around 6:20a. This wasn’t as early as Ted wanted given our ambitious plans for the day, but such is life.

We rode through mostly downhill rollers the whole morning. There were some steepish rollers in the very beginning, but then the grades became very gentle and we began to feel like we were actually in the Midwest. The scenery was more farmland. If we’re learning one thing on this trip, it’s that America is a giant farm. I’ve driven across the country before, but I never fully understood just how much of the thing is farmland before I spent the better part of 2000 miles riding through farms.

We were excited for the day because our 125 miles were broken up into nice 25-mile-til-a-cold-drink segments after the first 50 miles. We rode for 25 miles, then stretched and ate breakfast, then rode another 25 miles to a convenience store that served a nice breakfast, according to a flyer we saw at the Honey Hub. Come to find out the place was closed, seemingly permanently because there was a for sale sign, and apparently recently because an EMT showed up from the next town over for his regular morning coffee and was surprised to see it closed. This was a bummer, mostly because of our expectation of cold drinks and hot breakfast. We can live without these things, but when you’re dreaming of something for 25 miles, it’s disappointing when it’s not there.

We ate a Snickers bar (is 10a too early for candy?) to tide ourselves over, then pushed on to Enderlin for lunch.

Enderlin is another railroad town. We ate at the Traxside Cafe, which served enormous portions of comfort food for low prices – the perfect fit for us. I got pork cutlets with mashed potatoes and gravy and dressing and Ted got a chicken noodle hotdish. Apparently hotdish is a Midwestern casserole of sorts, but we didn’t know that. When I asked the waitress what it was, she looked at me quizzically and said, “um, it’s a hotdish with chicken and noodles,” like I should obviously know what a hotdish is. I asked her to be more specific and she said she didn’t know what was in it exactly, but it’s just a regular type of hotdish. I asked her to define the term “hotdish” and she said, very slowly in case English comprehension was my problem, “you know, a dish with noodles and chicken and vegetables.” Then I asked if hotdish was like casserole and, growing increasingly frustrated with my dumb questions, she said, “yeah, it’s like a hotdish.” 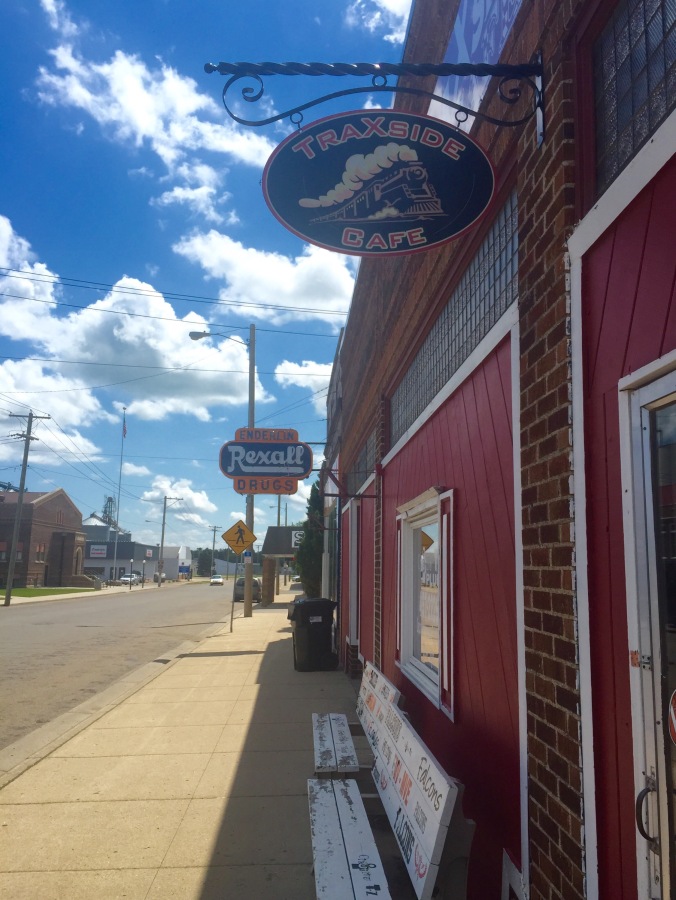 A man named John came up to our table while we were eating and told us to be careful on highway 46 because a cyclist was killed there last Friday, hit from behind by a semi. He told us that the mentality out here is that bikes do not belong on the road and that many people in the community are placing the blame for the crash on the cyclist because he had the audacity to ride on the road. This belief is obviously not supported by the law; cyclists have the right to ride on the road if the shoulder is not safe or does not exist. But it doesn’t matter if the law supports you if you’re dead, so we’ve been very careful and very grateful for our rearview mirrors. Most drivers have been courteous, but we’ve had to bail off the shoulder a couple times.

The shoulders have varied from not existing at all to being beautiful shoulders that seem to be made with cyclists in mind, as seen in the first picture below. Sometimes there are shoulders that are just rumble strips, which is the worst thing to ride over, and sometimes, as in the third picture below, there’s a gravel path beside the road that some folks decide to ride on. It’s slow going on gravel, though, so we tend to stay on the road as much as possible. The middle picture below is of this annoying type of shoulder that could have been great, but the right portion is a steep slope toward the ditch, which is hard to ride on for a long spell. And the surface is pretty poor so it’s just not fun all around. You become very familiar with all of the different types of shoulders on highways on your bike. 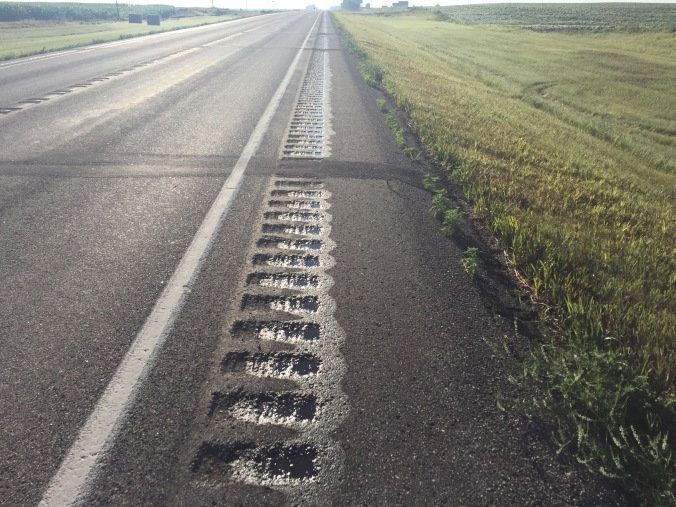 The section of road from Enderlin to Kindred was dangerous no-shoulder land, and with a headwind for about 30 miles, it was not fun riding. Hot, too, and lots of traffic. We reached Kindred and were greeted by a beautiful bike path and this friendly sign.

After we drank two liters of Gatorade at the gas station, we took on the last 20 or so miles to Fargo. We were both feeling surprisingly great after 105 miles and were like, “20 miles? That’s nothing!”

Turns out 20 miles is not nothing, especially because the headwind picked up significantly during our short break. We made it to the strip mall district past West Fargo and made a quick stop at Verizon and an outdoor store, then made the final push to our warm showers stay near downtown Fargo. All told, it was a 129.2 mile day, further than I ever would have thought possible! 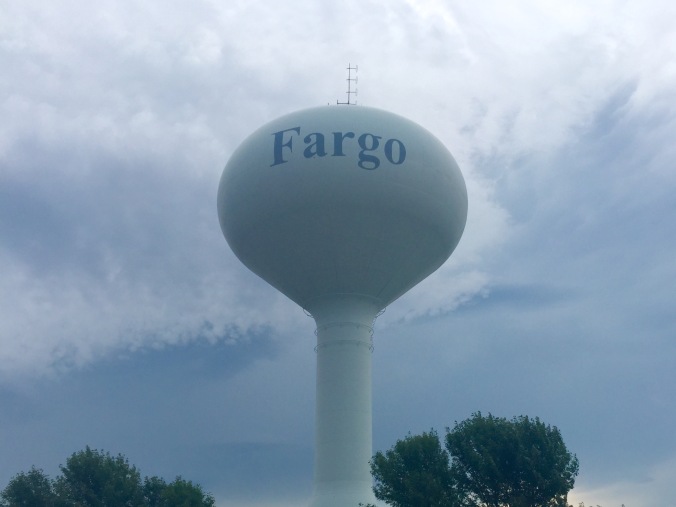 Our warm showers host is amazing. Lindsey is  24 years old, already has a master’s degree, and works as a wetlands biologist for the USDA. Very far along in her career for being so young! Super smart, friendly, and a great cook! She made us sausage sandwiches, coleslaw, and country-fried potatoes. Perfect meal after a long ride. She also read us a very informative Wikipedia page about hotdish and told us that it’s one of the main things we should know about as we travel through the region. That explained the waitress’s confusion. I may as well have been asking her to explain bread to me. 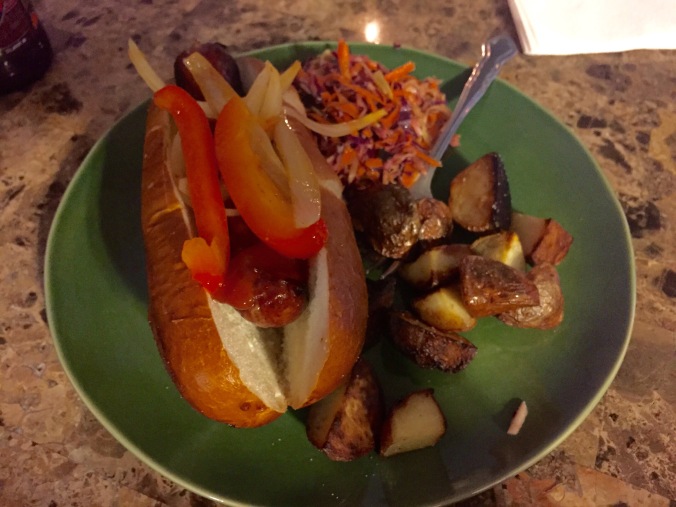 Early to bed tonight to hang out in Fargo tomorrow morning.