Dani and I first started seriously considering the prospect of a long-distance bike tour in the middle of January. So that means that I’ve had a little over 5 months to daydream about what bike touring would be like. Although each daydream had its own variations, they all generally involved us riding along a nice paved road along the bottom of a beautiful valley, alongside a creek, and with mountains in the background.

Or to put it more succinctly, I was daydreaming of today. 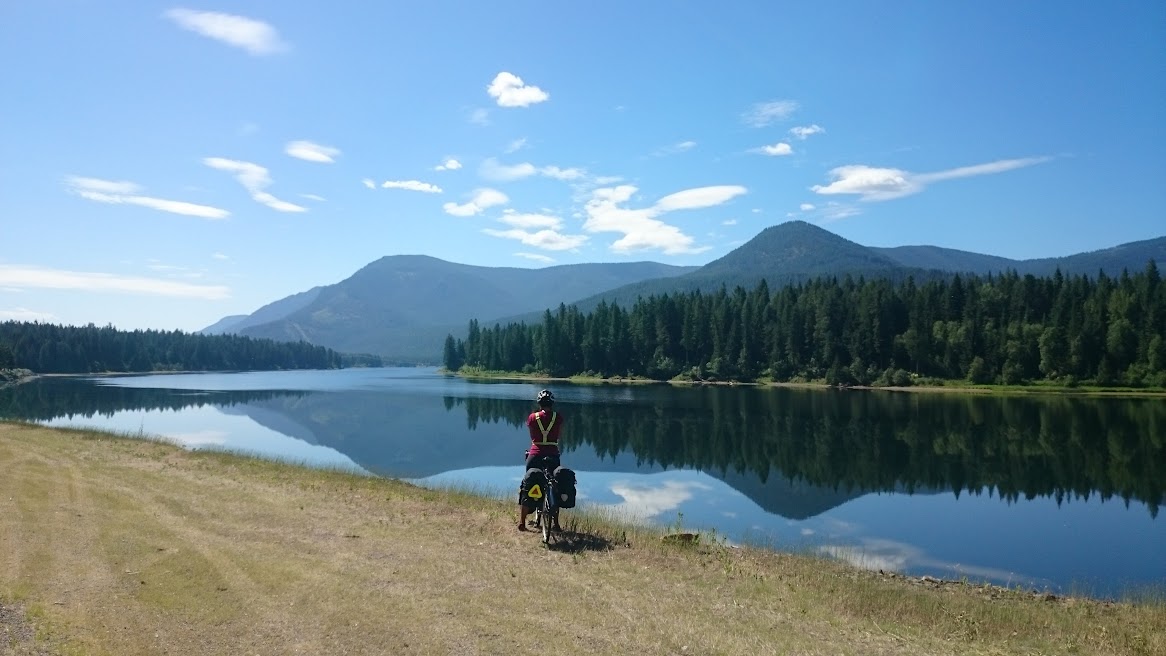 We started out from Annie’s Orchard at what we assumed was 7:45a, but we forgot that the time zone changed at the Idaho/Montana border, so we almost immediately lost an hour.  At the beginning of the day, we had to make a choice between taking the main Adventure Cycling route or talking a slightly different route, the “Heron Alternate.”  The Heron Alternate was three miles longer with considerably less traffic, but poorer road conditions.

After a little debate, we decided that we valued less traffic over better road conditions. However, if we knew that “poor road conditions” meant a washboarded dirt road with no smooth path, we might have made a different decision. That being said, the scenery was incredible. Farmland. Mountains. Trees. Beauty.

No official welcome from Montana, but at least the Inn was happy we arrived!

Montana’s unofficial welcome: an end to the paved road. 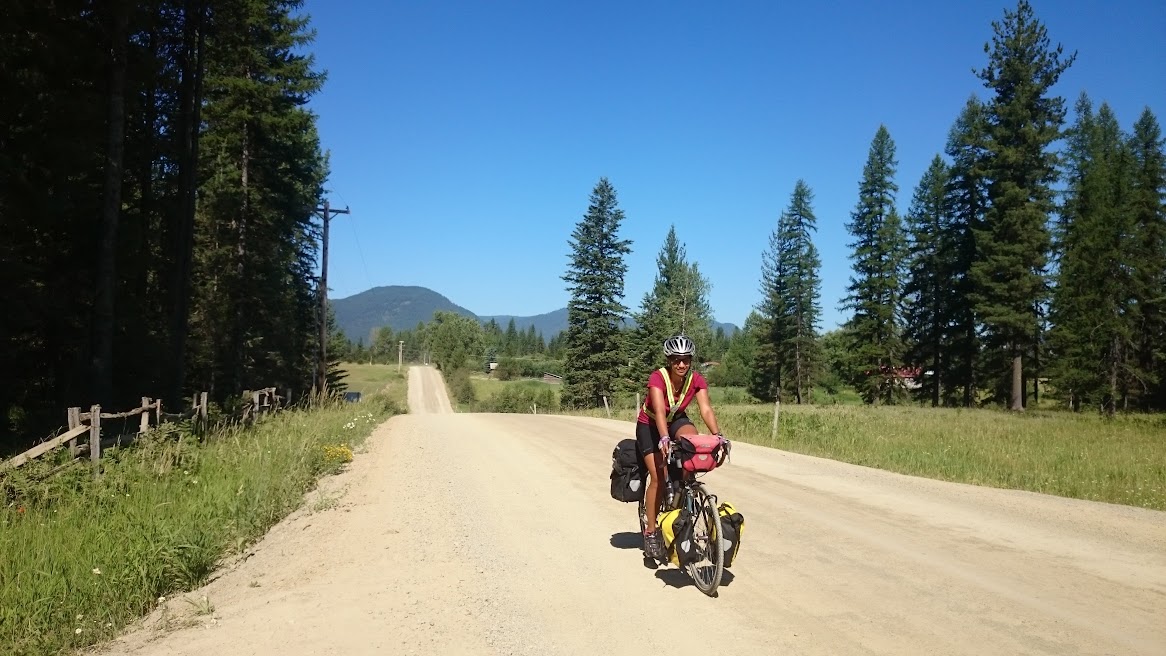 After we rejoined the main route, we rode for about seven more miles before we stopped at a market near the junction of Rt. 200 and Rt. 56. This might be the best store ever. We bought banana nut bread, fudge, two types of cookie bars, chocolate milk, and a fresh-as-you-can-get-just-out-of-the-oven chocolate chip cookie. Everything was divine, and inexpensive, to boot! We met a friendly retired man who grew up in the area and had done a fair amount of biking on the roads we were taking today.

After getting back on our bikes, we made the turn onto Rt. 56, where we spent the next 35 miles. At first we were a little nervous about spending so much time on a road with a variable shoulder width and a 70 mph speed limit, but traffic was light, most of the drivers were very polite, and those that weren’t didn’t end up hitting us, so all’s well that ends well.

But this road was the stuff of my daydreams. Exactly what I thought touring should be. Just wonderful vistas everywhere we looked. 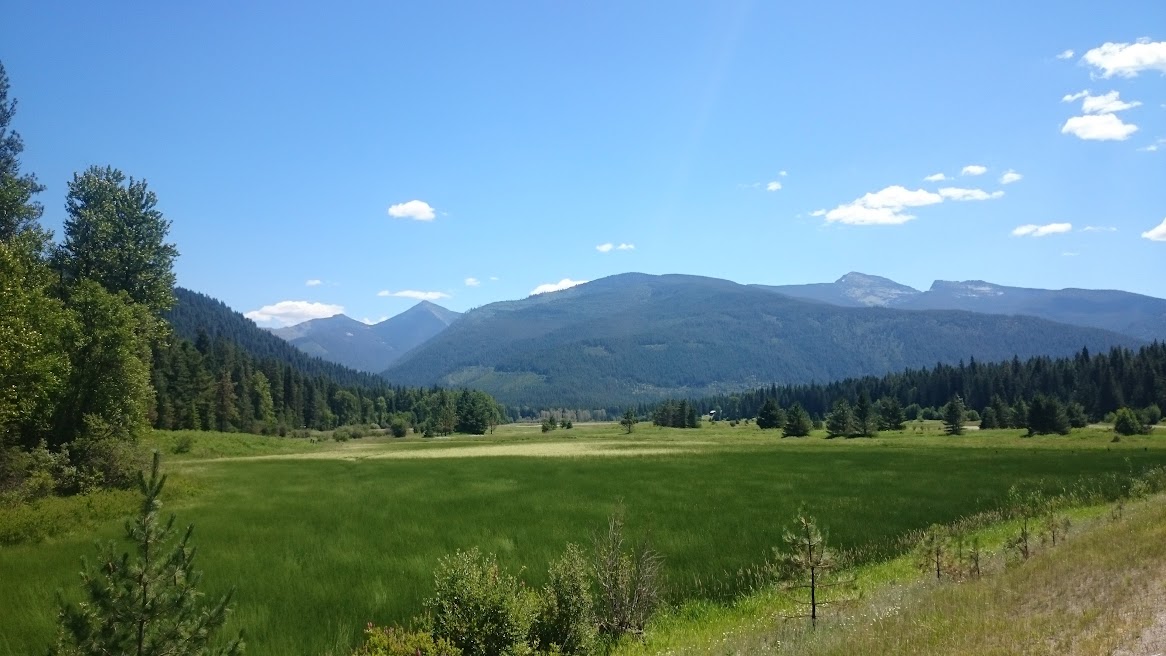 Halfway through our time on this road, a man in a camper who was going the opposite direction pulled over to chat with us and ended up leaving us with an ice-cold bottle of water and can of Dr. Pepper. We haven’t really mentioned how hot it has been. Record heat wave in Montana and all that. Suffice to say, the cold drinks were MUCH appreciated!

A little bit further down the road, we came upon Bull Lake.  It was clear and beautiful and we were hot and sweaty.  So we jumped in!! A midday swim is just what we needed! We also definitely needed the giant pile of cheese and bacon covered fries we ordered at a restaurant called the Halfway House a mile or so up the road. To be honest, we might have ordered food just to give us more time to enjoy our delicious huckleberry lemonade.

After we finished Rt. 56, we turned onto Rt. 2.  A few miles down the road, we stopped off to hike down to Kootenai Falls, which were lovely.  So much of the water around is a lovely blue-green, and we never get tired of looking at it.

After visiting the falls, we pushed through the last 10 miles to Libby, MT. Libby is a much larger town than we expected and we got turned around a little bit, but we eventually we found our way to the campground, which was conveniently located right next to a grocery store, which conveniently had free seltzer water on tap and free wifi that reached to our campground, so it was all gravy.  The only downside is that there was no shower and it was still quite warm, so it was a hot and sticky night.