Our day started at 3:00a today because of this:

I normally sleep through everything, but this storm even woke me up. We set up our tent under a pavilion because someone at the convenience store last night told us about a severe storm warning that forecasted hail, pouring rain, and “damaging winds.” We didn’t fully grasp the extent of her warning, but when the wind came, we got it.

The rain didn’t care about the pavilion; it was raining sideways and there was a river of water flowing under our tent. The wind didn’t care, either. Our tent was picking up at the side with us in it, bending at an impossible angle, and flapping around like a windsock. We are really putting this new tent to the test and it’s succeeding! The pavilion did help us feel protected from the lightning, though. The wind got so bad that the power went out in the town with a huge, scary electrical buzz and snap. A lot of things have scared me on this trip (mainly vehicles passing too close), but this storm ranks highly among the scary experiences. I tried to take a video to capture the wind pummeling our tent, but you can’t see anything. Maybe you can hear it.

I couldn’t fall back asleep until 4:30a, but we made it through! Come to find out that the lady at the convenience store left out that tornadoes were in the forecast, too.

The alarm went off at 5:30a, but it was still pouring, so we ignored it. The rain cleared up around 8:15a, so we packed up and got on the road at 8:45a. We started out on some gentle rollers, but the terrain, overall, was significantly flatter today. This was great news because we were racing a storm and needed to book it!

As much as I didn’t want to get rained on, the rain clouds surrounding us today were spectacular and they really made the green fields pop. Scenery-wise, this was my favorite day since Glacier. We even got to run with horses for a bit, which was magical. Please ignore my nerdy narration in the video below and try to focus on the horses. 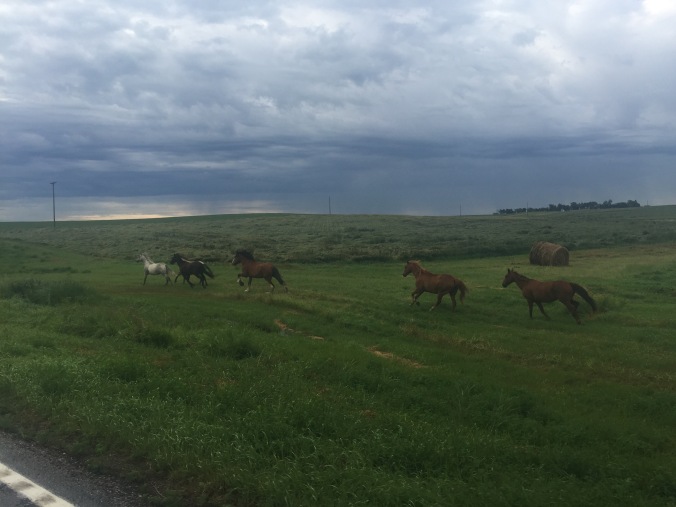 We got to a small town called Napoleon about 26 miles in and decided to eat an early lunch at White Maid Drive-In. Ted got the Three Little Pigs, a sandwich with BBQ pulled pork, ham, bacon, and a pile of coleslaw on top. I got a grilled ham and cheese sandwich, and we shared chili cheese tots. Healthy choices all around. Everything was delicious, of course, and the bill was unbelievably low. 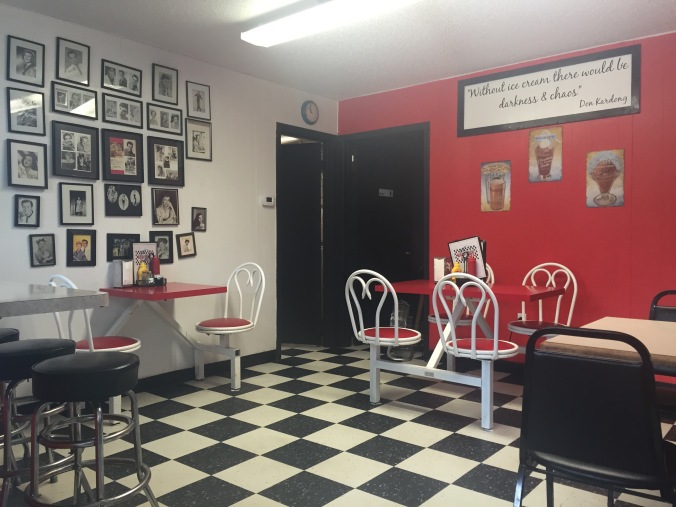 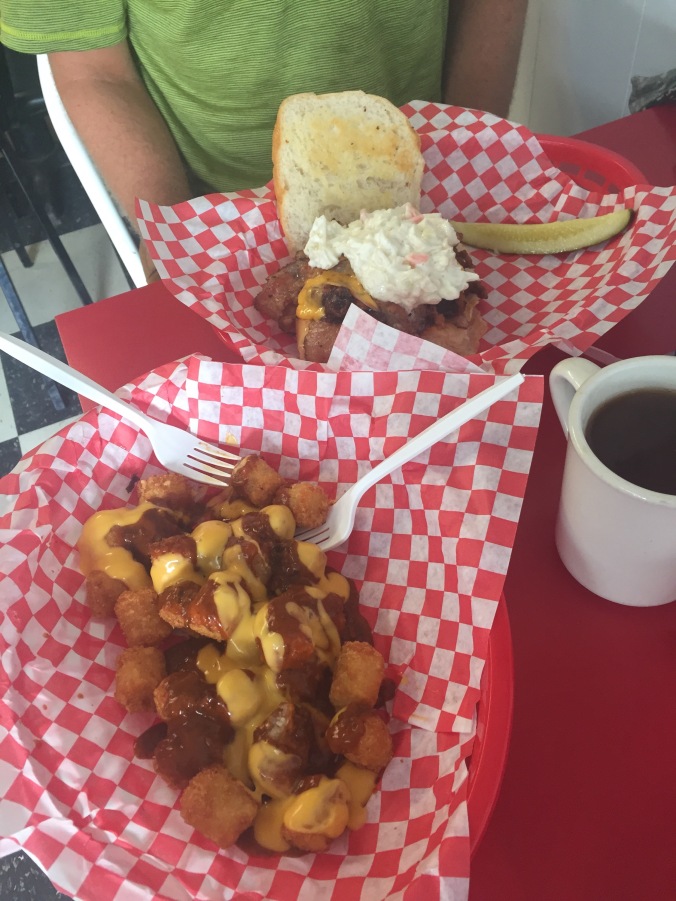 As we were getting ready to jump back on our bikes, two men (one in his 50s and one in his 60s) who live in the area came up to us to ask about our tour.  Ted gave the usual spiel, during which he mentioned that he loves coming through these small towns to get a nice hot meal because it’s a welcome reprieve from our usual food in our panniers. While Ted was answering one man’s questions, the man in his 60s took out a wad of cash, counted off $100, then came up to me and said, “Here’s a hundred bucks. Go get yourselves some warm meals. You guys are really doing something here.” I was shocked, of course, and told him multiple times that we couldn’t accept his kind and generous gift, but he wouldn’t budge! We thanked him profusely, and he ran into the restaurant quickly, perhaps so we wouldn’t try to give the money back? I’m not sure, but that was such a shocking display of kindness that I just sort of stood there speechless. He didn’t even tell us his name. We chatted with him for under 5 minutes. This guy was a complete stranger and he just gave us $100 out of his pocket.

We had read enough blogs to know that the people you meet along the way are the highlight of the trip, but this man, the friends we made in Glasgow, all of our warm showers and couch surfing hosts, etc. have really restored my (fairly broken) faith in humanity. That sounds cheesy, but it’s true. 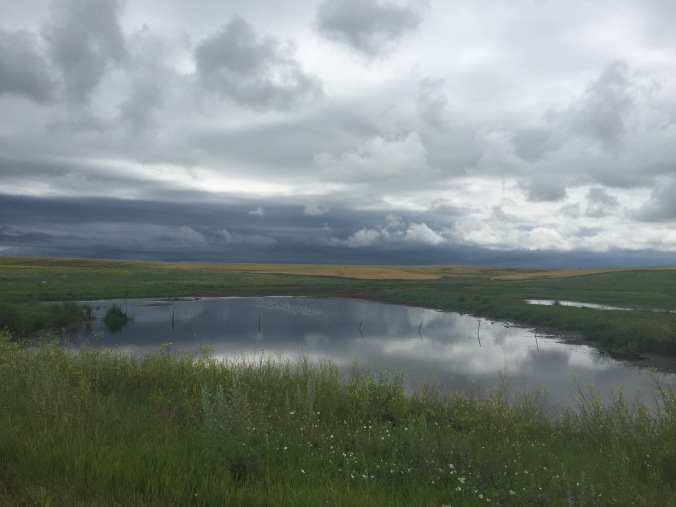 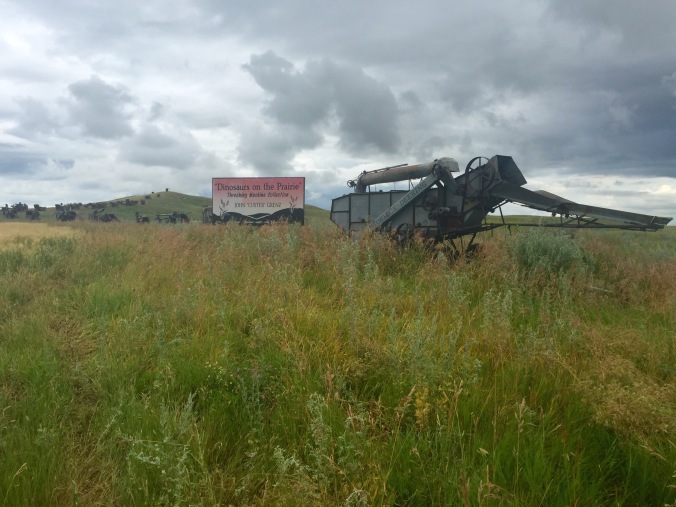 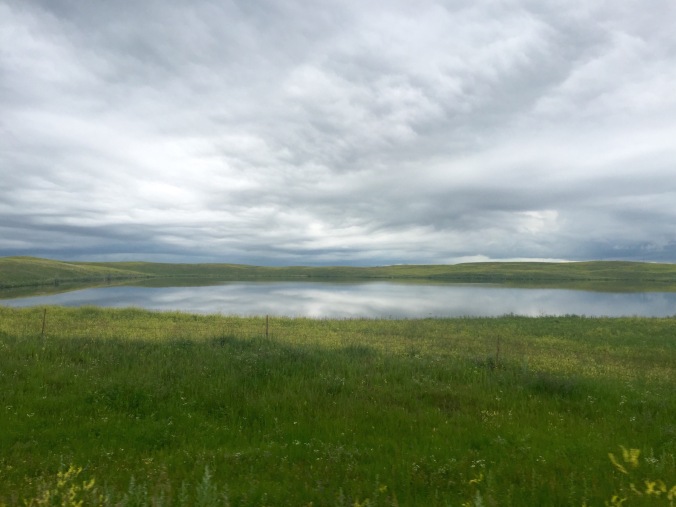 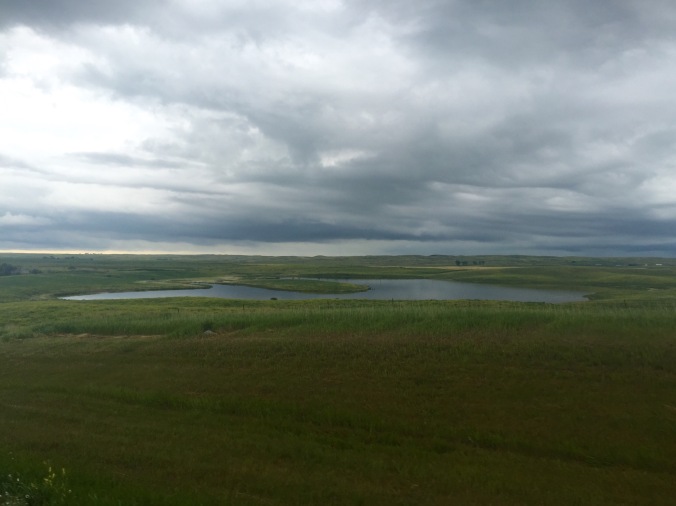 We started riding pretty quickly after lunch because there were storms rolling in from multiple directions. We’re not afraid of getting wet, but I’ve always been pretty terrified of getting struck by lightning, and being on a bike in the middle of a prairie is just asking for  it. It was beautiful, at least, and we still managed to get a lot of pictures. There were many lakes and a “Dinosaurs of the Prairie” threshing machine collection. 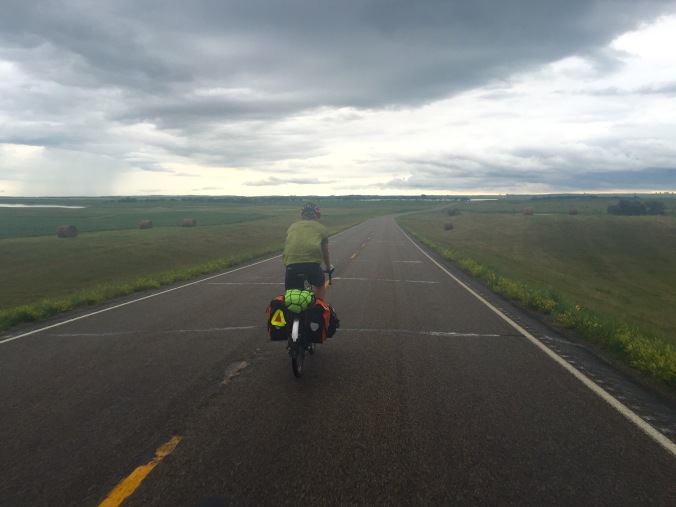 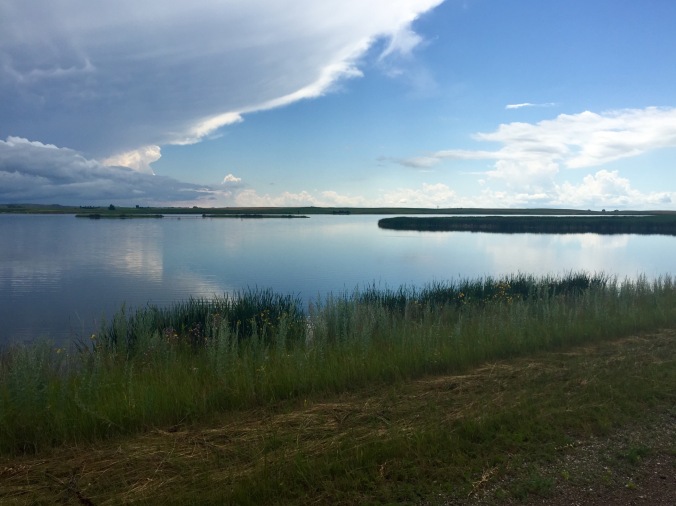 After a quick and beautiful 39 miles, we arrived in Gackle, ND a tiny town that happens to have a bike retreat called the Honey Hub. The Honey Hub was started by a beekeeping family who spends summers in Gackle and winters in Northern California. They noticed a bunch of bikers coming through Gackle one summer, invited one to stay in their basement, and then decided to open up their basement with its bathroom, two beds, a couch, laundry, and wifi to traveling cyclists 365 days a year. For free! The owners, Ginny and Jason, are yet another example of the kindness we’ve encountered on this tour. Also, Jason’s father was a beekeeper and he partnered with some guys to start Honey Stinger, a line of honey-based energy products for endurance athletes. He’s selling these products out of the hostel for much less than market price, so we’ll stock up! 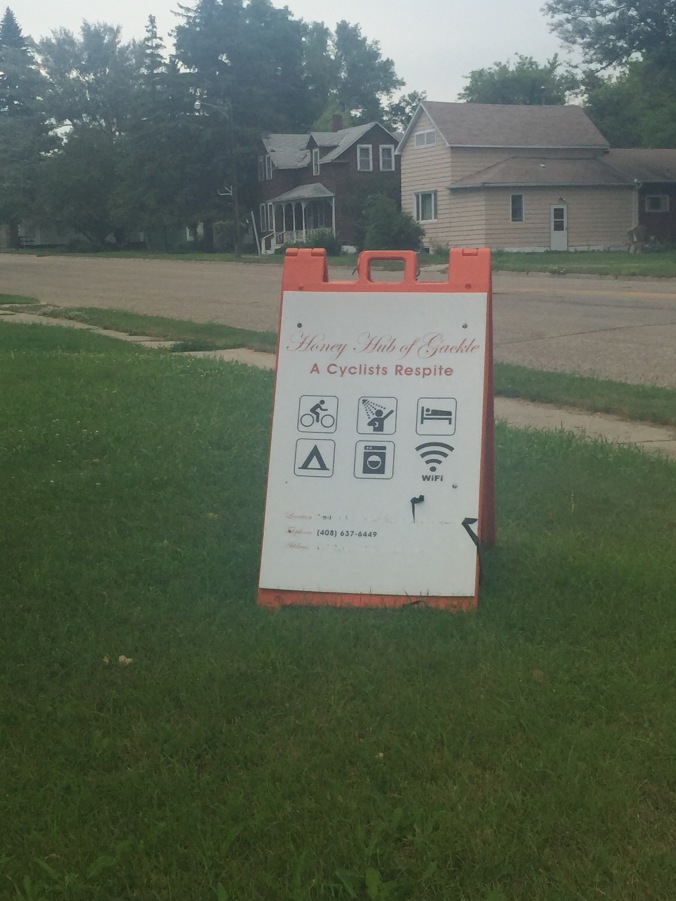 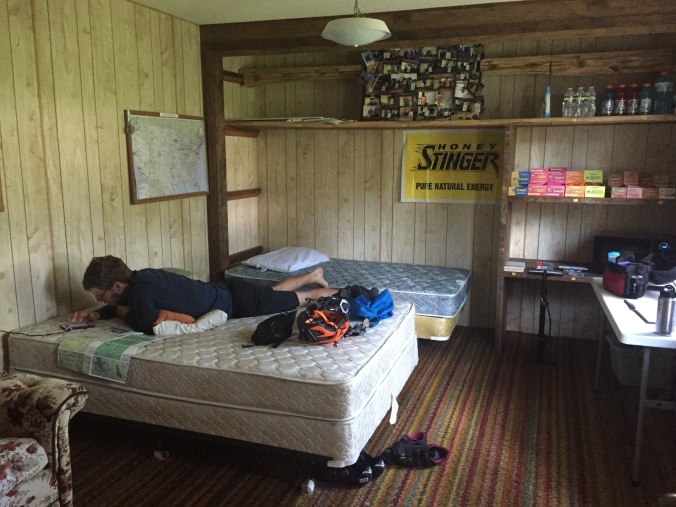 We ate fried chicken at the Tastee Freez tonight, and got to listen to a group of five men over the age of 60 talk about the good old days. 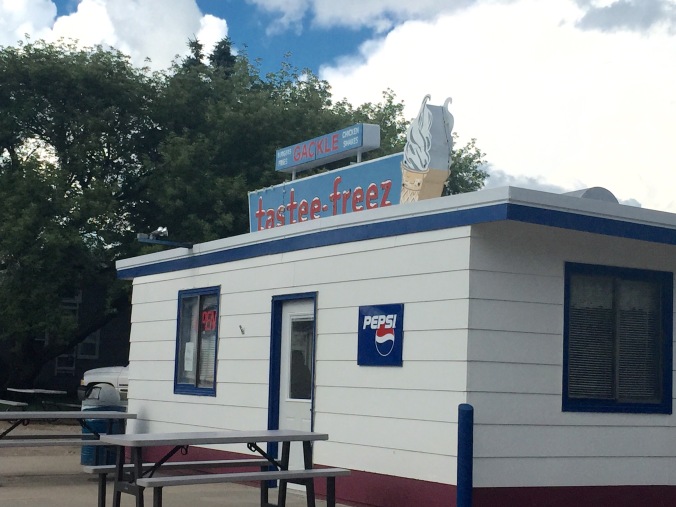 Back to long rides tomorrow. We’re shooting for Kindred, ND, which is 100 miles away, but we’ve got a 70-mile bail-out point and we could reach Fargo if we muster up superhuman strength for a 125-mile day.